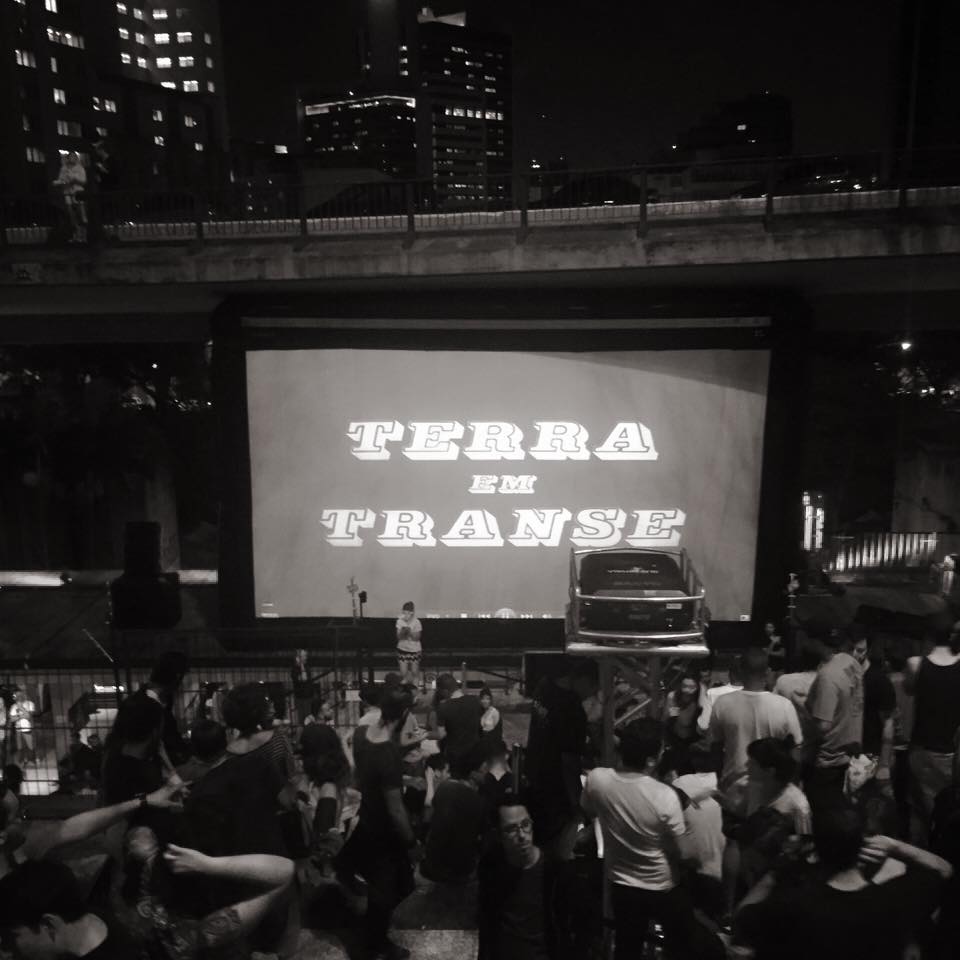 My own introduction to São Paulo was in September 2004 – a brisk early-morning taxi ride into a city that I didn’t yet know would become my home.

Prior to arrival on final approach to GRU it occurred that, although being fortunate enough to have travelled to many, I somehow had no visual reference for this place at all – the largest city in the Southern Hemisphere.

Despite exponentially more documentation in English than existed a decade ago, this is still so for many visitors. Unaware of iconic buildings, of landmarks we would automatically find familiar in North American & European cities – when I arrived I knew practically nothing about São Paulo besides its name.

Into this vacuum poured every image I encountered on that drive into town. Bewildered and jet-lagged, along with the initially fascinating pixacao graffiti which decorated decaying buildings en-route, one structure stuck in the memory – something which looked like an observation deck above the entrance to Tunel do 9 Julho, close to our destination. “What is that?”, “Oh, there’s nothing in there.”, “Shame.” – and for a decade this remained the case. 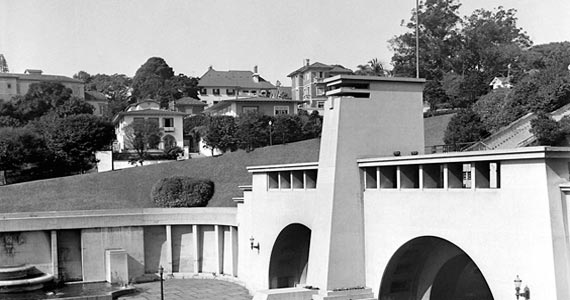 Mirante 9 de Julho, built in the 1930s, is one of the city’s architectural gems built over a twenty year period which led São Paulo to be nicknamed “The New York of the South”.

Closed for half a century following construction of Lina Bo Bardi’s MASP which towers behind it, at the inauguration on 23rd August 2015, the public took in a view which barely anyone had seen since.

Mirante’s decay exemplifies the dystopian eras of former Mayor & State Governor Paulo Maluf – a period during which a handsome city was smothered in concrete with barely any regard for the population. 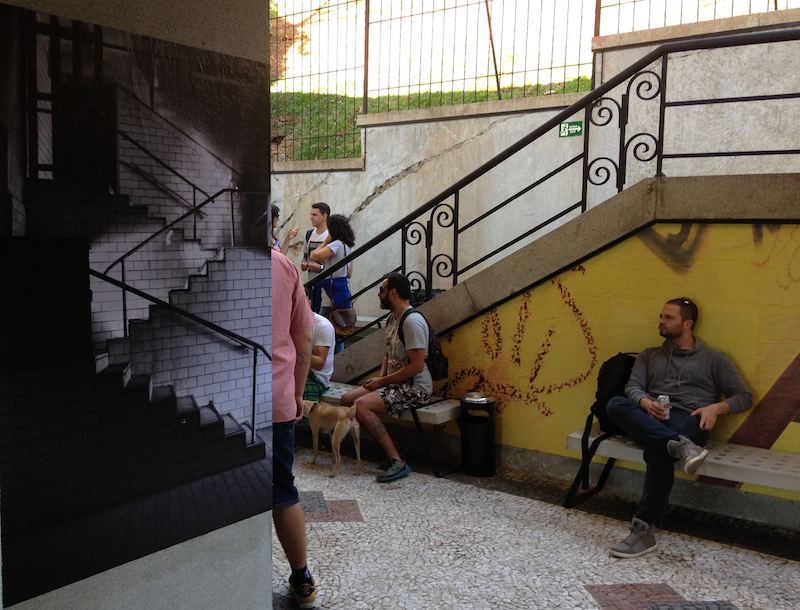 We were forbidden to love you, São Paulo. – Facundo Guerra

São Paulo has plenty of such examples, a long-abandoned public patrimony of buildings and spaces which one by one are being resuscitated and democratised.

There’s something quite magical about dead public space put to new use. We’re not talking about gentrification, but the people reclaiming their own – with or without official help.

And this, in the centre at least, is the engine driving the rebirth of São Paulo and the way it sees itself.

The opening to the population of an iconic building in such a key location is like the lifting of a blindfold, the enabling of a new civic self-awareness, and an optimism against the odds.

Photo-gallery from Inauguration of Mirante 9

Meanwhile, mega-developments such as exist in areas like Novo Brooklin represent an entirely different vision of the city’s development, one which is – with the end of this construction boom – hopefully consigned to history. The historical walls and fences – embodying/endorsing centuries of inequality – are slowly coming down, replaced by human beings simply interacting with each other. 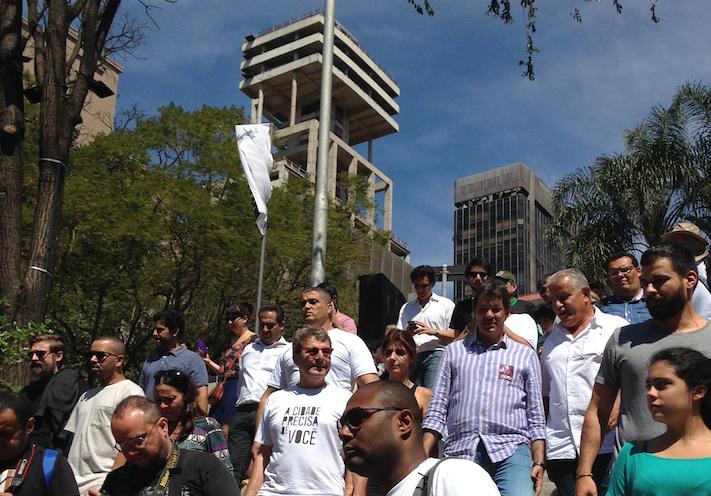 Just metres away from Mirante 9, behind MASP, runs the iconic Avenida Paulista. The decision by the São Paulo prefeitura of Fernando Haddad to close it (to traffic) / open it (to pedestrians) each Sunday has had a catalytic effect already. In a landlocked megalopolis, a pedestrianised Paulista effectively becomes the beach, analogous to the closure of Rio de Janeiro’s Avenida Atlantica to vehicles on certain days. For many residents nearby – starved of accessible public space – the initiative has been embraced unconditionally.

We all live not only in the built environment but within our own psychogeography, and in a city this size that is more crucial than anywhere. São Paulo viewed from on foot is strikingly different, vibrant; it is more secure, it is more healthy, it is bursting with culture, it demonstrates the instantaneous improvement to quality of life that ditching artificial & inherited dependence on the automobile can bring. Cyclists arriving at Mirante 9 – now a cultural space, gallery, cafe – along the new Ciclovias of Avenida Paulista can survey buses snaking down 9 do Julho below while a window to the world of the possible is opened. 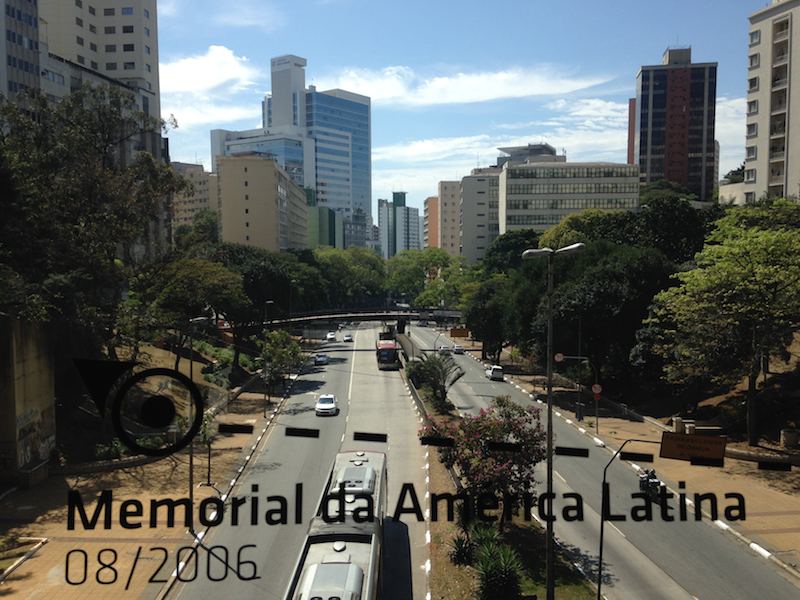 The windows of Mirante 9 also host a photographic exhibition

Descent down a narrow staircase into a gallery below reveals images of modern São Paulo curated by group Rolê, a physical reminder of the city’s sometimes dark heart.

World-renowned urbanist Raquel Rolnik, in a Kakaos interview with Katia Lessa, talked about the effect of such endeavours in the city.

“I have said that SP is experiencing an epidemic of love for the public space. People are asking for it. We can compare this initiative to what happened in New York in Times Square, for example. Every change generates some resistance….what happens when you go to the street is that people start to think of the city in which they want to live…”

“São Paulo is moving in a diametrically opposite direction to the one the city took two decades ago. Not long ago it was favouring the construction of shopping malls, people wanted to live in condominiums, the road system was designed for car traffic. Today there is a predominance of young people in our population and this young bubble has great enthusiasm. There is a transformation of urban culture drawn from these young people attentive to what happens elsewhere in the world. Cultural collectives, Cycle-Activist movements etc … In addition there is an interesting weather phenomena. São Paulo is no longer the land of drizzle – it has never been warm – but now people prefer staying outdoors. And finally we now have a City Hall which captured this desire and sought to give answers.”

“Brasil has the basis of a slave society. The resistance here (to such ideas) is related to class. The street presupposes that there is heterogeneity in these enclosed spaces. It’s a very different mentality to European countries, for example, who understand the richness of this exchange. Here, this guy who lives alone and does not really want to mix with people of another class, he wants to live in the bubble, he’s that guy who does not like to see poor people on a Gol flight, for example. But the street is not like that, the street is for everyone. And it will take a lot to change that (mentality).” 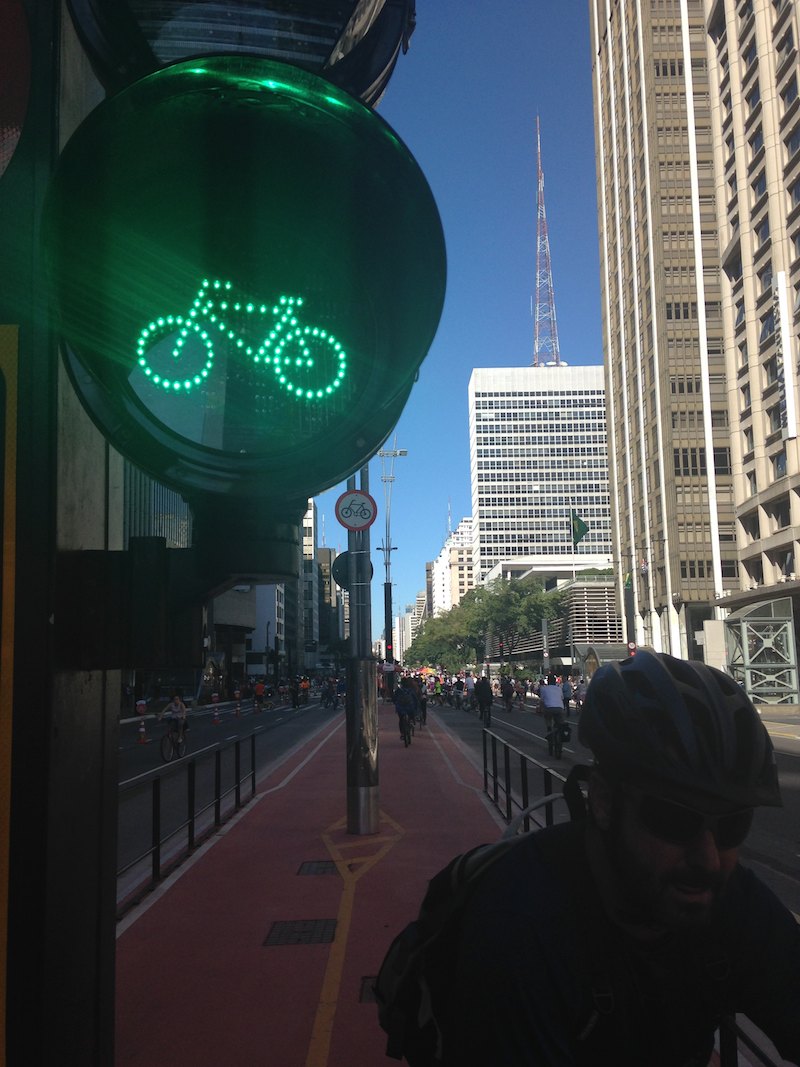 Although popular, Cycle lanes along Avenida Paulista were installed amid resistance & controversy

Upon the opening of Mirante 9, Facundo Guerra – driving force behind the project, posted this text on social media, which articulated brilliantly and poetically how many in São Paulo are beginning to feel about their city.

“We inherited the myth of the Bandeirantes and we turned Borba Gato, this genocidal murderer, into the founder of our identity. As a legacy we have this metastasis in the form of a sterile developmentalism, millions of tons of concrete that today we adorn to try to make them bearable, but which would be better if they didn’t exist. We are confined in metal bubbles, in concrete bubbles, glass bubbles, like cattle with plastic feed. They said to our faces that São Paulo’s beach is the mall, that Cumbica is the best place in our city, and our retirement plan is a bed & breakfast in Bahia. That here we cannot raise our children, that this land only serves to make money, like an apocalyptic version of Serra Pelada.

We were given a hideous bridge as a new picture postcard, had our backbone transformed into an avenue of bankers, whole neighbourhoods into the city’s dormitories. They called us ugly, with no horizon, no prospects beyond escape. That there is no love here. They poisoned our air, our water, and even that has been taken from us.

For our identity they gave us the overworked neighbourhoods that still battle it out with each other, and one unique superpower: the ability to render the other invisible – practiced every day with both people and places – at traffic lights when faced with a drug addict that we call a zombie, a metaphor used in a cruel and ironic tone to name our biggest social monster, precisely because they do not produce like us, the living.

Our history and architecture were left to ruin, were actively allowed to collapse. They left us a palimpsest city where layers of concrete were superimposed over one another without respect for the past, planning or care.

We were told that we must conquer or be conquered – non ducor duco – we were put in a permanent state of war against each other, poisoned with fear on the streets and left so that the only cement was a communal & ancestral hatred of São Paulo . No history, no horizon, lost.

We were forbidden to love you, São Paulo.

Enough. Perhaps this atavistic hatred has covered our eyes with cataracts and we are unable to name this emergency yet, but we will, with the passing of time. We occupy the streets with food, music, art, movies, with life in all its power. We saw in the ugly the beautiful, we stopped being afraid of the street – an axis around which a new identity of São Paulo is beginning to coalesce. We fought tooth and nail for a piece of land that was nothing more than parking lot, but that we will call a park. We transformed a scar caused by militarism into a space within which to teach the new Paulistanos to cycle. We occupy places that we’ve never seen before and recovered the avenue from the hands of bankers. We will make tourism in the city we inhabit. We no longer accept this hatred, this permanent state of war, the need to conquer the other daily.

São Paulo is a city in the future: post-apocalyptic, radioactive, dry, where one day money and work won’t be the only imperatives of social life. When the world trembles, all cities will be similar to ours. From chaos and ugliness emerge a beauty that only we, who reject their idea of beauty, see. We want the streets, we deny their heroes, their monuments, their cars, their ways of life. Even if it takes us decades we will do something beautiful with the debris we inherited – we will make a town, not an abstraction called São Paulo. Occupy every crevice, every crack, every hole of the grey city. This is the end of this cycle of hatred, and the opening for a possibility of a new beginning in the relationship with São Paulo.

Our land is in a trance. We are lucky. We are the new São Paulo, and this town is our playground.”