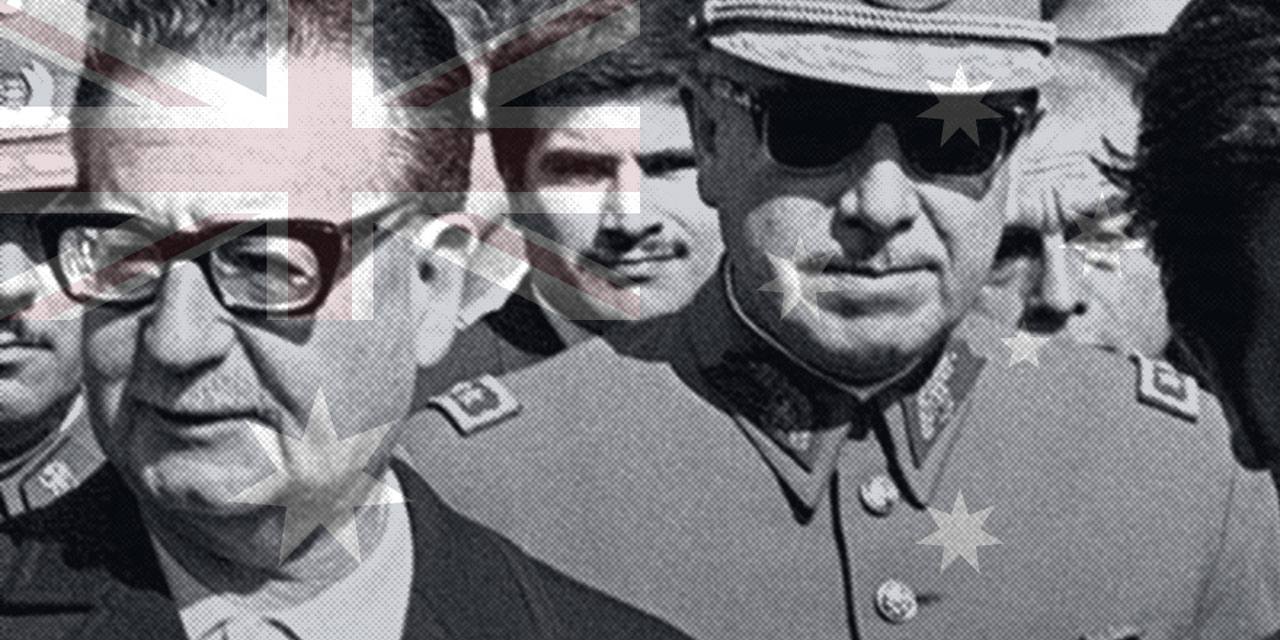 Washington’s central role in the violent overthrow of Chile’s democratically-elected government is notorious. The part played by Canberra has long-been secret – newly-released documents shed some light, but raise more questions.

Since the mid-1970s, it’s been known that ASIS, Canberra’s foreign intelligence agency, was somehow involved in the wide-ranging White House-directed mission to undermine the government of Chile’s Salvador Allende in the lead up to his blood-spattered CIA-backed ouster. Details remained elusive ever after though, with officials refusing to disclose documents on the basis of national security.

That was until June this year, when Dr Clinton Fernandes won a legal challenge brought against the National Archives, resulting in Canberra turning over hundreds of files to the academic. Now stored at the US National Security Archives, explicit details of covert operations, intelligence gathered, and contact with the CIA are all redacted. Still, what remains is rife with scintillating, never-before-seen nuggets.

The file trail begins in December 1970, three months after Allende narrowly won the Chilean presidency, when ASIS was given permission from then-Foreign Minister William McMahon to open a station in Santiago to support US covert operations. With CIA activities in the country closely monitored by Allende, Langley was compelled to seek the assistance of allies. Australia wasn’t the only country enlisted for this purpose – declassified files also point to Brazil’s military dictatorship helping Langley not only subvert democracy in Chile, but support General Augusto Pinochet’s subsequent repression of political opponents.

Nonetheless, by June the next year, the station hadn’t yet been inaugurated, and there were doubts internally as to whether it was a necessary or sensible move at all.

“Today is not our day,” the memo laments, before noting an official – name redacted – was now questioning the need to go ahead with the “Santiago Project”, as they felt the situation hadn’t “deteriorated to the extent that was feared,” not least because Allende “had so far been more moderate than expected.” Reference is also made to a recent “tightening up by the security services,” which presumably made operating in the country without detection more difficult.

Six months later though, the station was clearly fully operational, a heavily censored progress report detailing various “administrative problems” the mission has faced since launch, including a lack of “effective translation service” and failure by operatives to meet Spanish language requirements. The “attitude” of a certain redacted individual or organization “to the question of basic security” of the station was also said to be “appalling”.

In December 1972, another document set out “problems and misunderstandings” between “[redacted] and the station” – the blacked-out text is so brief, it could well refer to the CIA. Chief among the issues still legible in the file are “several instances” in which “detailed and timely feedback of information” has been lacking. Tantalizingly, the two most recent incidents of this phenomenon reportedly “pertained to biographical details”, and caused “embarrassment” – “such incidents do little for [ASIS] reputation.”

It’s unknown if these “problems and misunderstandings” were resolved subsequently, although it may well not have mattered – for in April the next year, Australian Prime Minister Gough Whitlam met with ASIS chief William T. Robertson. He was “uneasy” about the agency’s operations in Chile, as if “any publicity” were to arise from “these matters”, it would “extremely difficult” to justify the presence of Canberra’s spies in the country. Consequently, he demanded all clandestine activity in Santiago cease as soon as possible.

Suggestions for winding down the station are then outlined, including all ASIS equipment and records in Chile being “destroyed or returned to Australia,” after which all agency staff “would perform no clandestine activity.”

Five days later, in an internal station memo, Robertson recorded Whitlam’s “considerable amount of worry” about the closure given “the importance” of the mission to Langley, and his hope that “they would not interpret his decision as anti-American.” The Prime Minister added that “the last thing he wanted to do was to take precipitate action…that would embarrass the CIA.”

Plans were set in motion almost immediately, a set of instructions circulated to station staff. Whitlam’s decision is described as an “agonising” one, taken only because it would be “impossible for him to present an [ASIS] presence in Santiago as being in the direct Australian national interest.”

Similar sentiments are expressed in a memo the next month, in which Robertson states a proposal to continue the station’s activities was rejected by the Prime Minister, although he was “most concerned that CIA should not interpret this decision as being an unfriendly gesture to the US in general or CIA in particular.” The ASIS chief reassures recipients that agency headquarters was “very disappointed” about “the way in which this decision has come about.”

Come July 1973, the station was closed, a final report noting all its records had been destroyed, with equipment shipped back to Canberra, and a nameless staffer tasked with returning a Pentax camera personally. That same month, Whitlam met with US President Richard Nixon, reassuring him that he sought “good relations” with Washington, and he posed no threat to the White House’s interests in Australia or the Asia Pacific more widely. Still, the charm offensive was futile, for unbeknownst to him, he’d long-been earmarked for removal from office by US intelligence.

A maverick social democrat, within months of his 1972 election victory, he’d abolished royal patronage, recognised the People’s Republic of China, drawn up plans for Aboriginal land rights, and withdrawn all Australian troops from Vietnam, his ministers referring to the ongoing US war as “corrupt and barbaric.” In response, CIA operatives in Saigon were told that Australians “might as well be regarded as North Vietnamese collaborators.”

Even more egregiously from Washington’s perspective, in March 1973 Whitlam ordered raids on the offices of domestic intelligence agency ASIO, which uncovered Canberra’s involvement in the NSA and GCHQ-led ‘Five Eyes’ global spying network for the first time, 17 years after Australia became a signatory.

Resultantly, he threatened to close US listening post Pine Gap, a key component of the nexus, which “caused apoplexy in the White House,” CIA whistleblower Victor Marchetti has revealed, and “a kind of Chile [coup] was set in motion” to remove Whitlam from office.

First, notorious CIA counter-intelligence chief James Jesus Angleton – who considered Whitlam a “serious threat” – attempted to persuade the head of ASIO to falsely state the Prime Minister had lied about the raid in parliament, although he was rebuffed. He was finally brought down in November 1975, when Queen Elizabeth II’s representative, Governor General John Kerr, dismissed him at the behest of Langley and MI6.

While it may not be entirely clear from the files precisely what cloak-and-dagger activities ASIS got up to in Santiago, in 1977 Whitlam told parliament that the country’s intelligence personnel had been “working as proxies of the CIA in destabilizing the government of Chile.” Given Langley’s machinations ushered in two decades of dictatorship, during which untold numbers were tortured, murdered and disappeared by General Pinochet’s ruling junta, Australia’s role could’ve been significant.

Whatever the truth of the matter though, it’s certainly expedient to consider the example of Chile now. In October 2022, Brazil has a pivotal election, in which President Jair Bolsonaro faces off against popular left-wing figure Luiz Inacio Lula da Silva, who led the country from 2003 – 2011 and was jailed on bogus charges under the auspices of US intelligence-led lawfare connivance ‘Lava Jato’.

Bolsonaro trails his rival significantly in polls, yet appears confident of victory. This may be attributable to him visiting the CIA’s headquarters in March 2019, and the Agency’s chief convening a high-level secret summit with the President this year.

Given the number of critical eyes trained on Washington as a result, the Agency may solicit help in preventing Lula’s election from other foreign capitals to ensure plausible deniability, as in Santiago during the 1970s.

This could likewise well have been the case in Ecuador’s 2021 Presidential contest, during which the Agency seemingly relied on high-ranking contacts in Colombia to affect the outcome, and ensure the election of Guillermo Lasso – a wealthy ex-banker and avowed enemy of Cuba and Venezuela.

As was the case in 2002, Lula has sought to allay concerns about his administration, with what some have interpreted as coded signals to Washington, signalling a willingness to cooperate should he win. Meanwhile, new attempts are emerging to prevent his candidacy, and the international far right, led by Steve Bannon, has mobilised against him, with the former Trump advisor describing the former president as “…the most dangerous leftist in the world […] a criminal and communist supported by all the media here in the US, all the left-wing media.”

Narcos: South of the Border

Bolsonaro and Islamophobia in Brazil