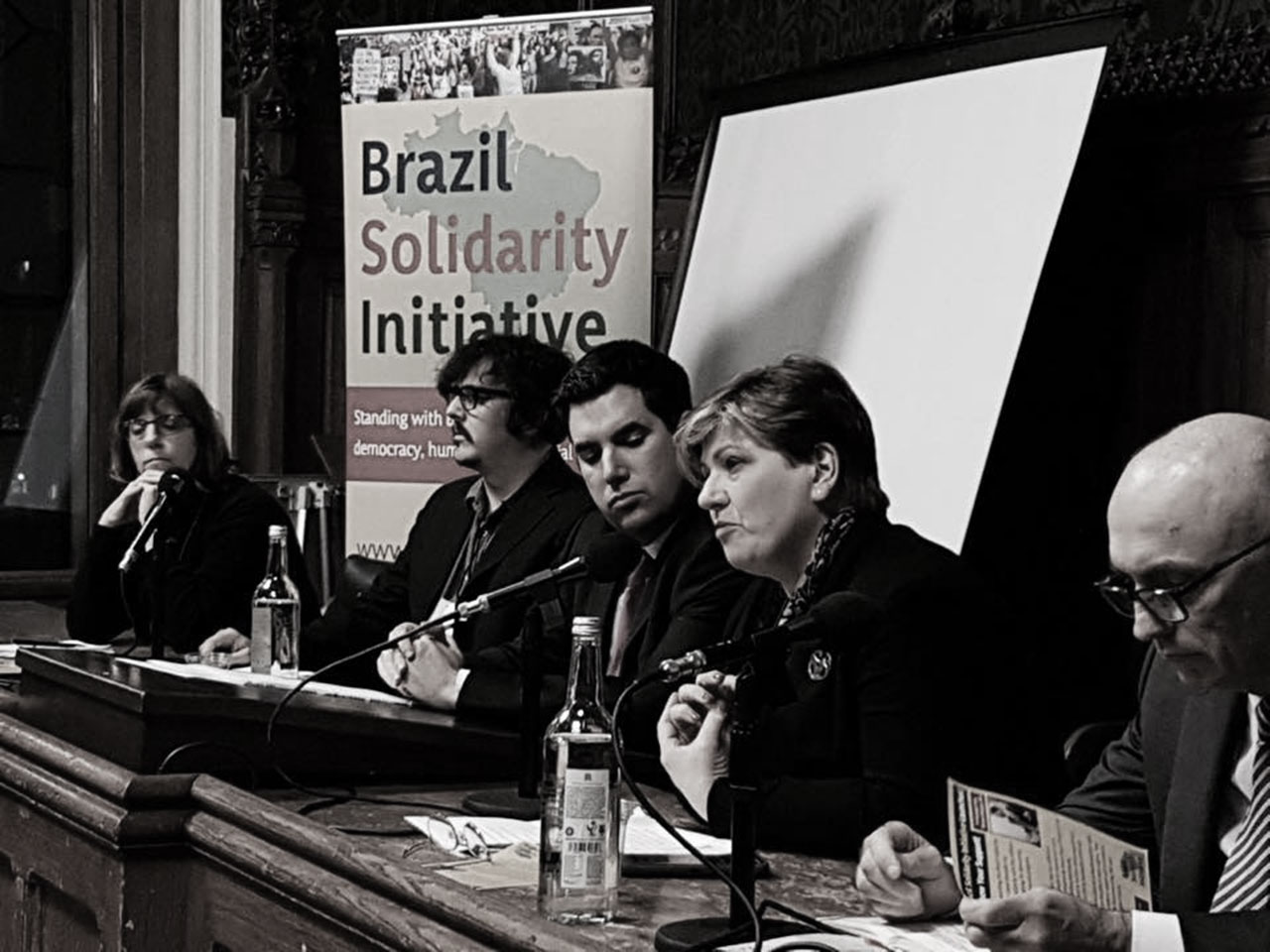 Brazil Solidarity Initiative: Editor Speaks At UK Parliament
AUTHORITARIANISM DEMOCRACY LAWFARE SOCIAL INCLUSION SOCIAL MOVEMENTS SOVEREIGNTY UNITED KINGDOM
SHARE
Home AUTHORITARIANISM Brazil Solidarity Initiative: Editor Speaks At UK Parliament
To mark the launch of the new Brazil Solidarity Initiative, Brasil Wire founding editor Daniel Hunt joined various speakers from the Labour Party and Union movement, including Shadow Foreign Secretary Emily Thornberry and Chris Williamson MP at the House of Commons. There was an unusual surge of support for the event, chaired by Richard Burgon MP, shadow Minister of Justice, and it was oversubscribed to the point that a second committee room needed to be opened, with the panel switching rooms to address both audiences which had a large contingent of London-based Brazilian activists. Below is a transcript of Daniel Hunt’s speech, which is made available here on the request of those who attended, and for the public record. 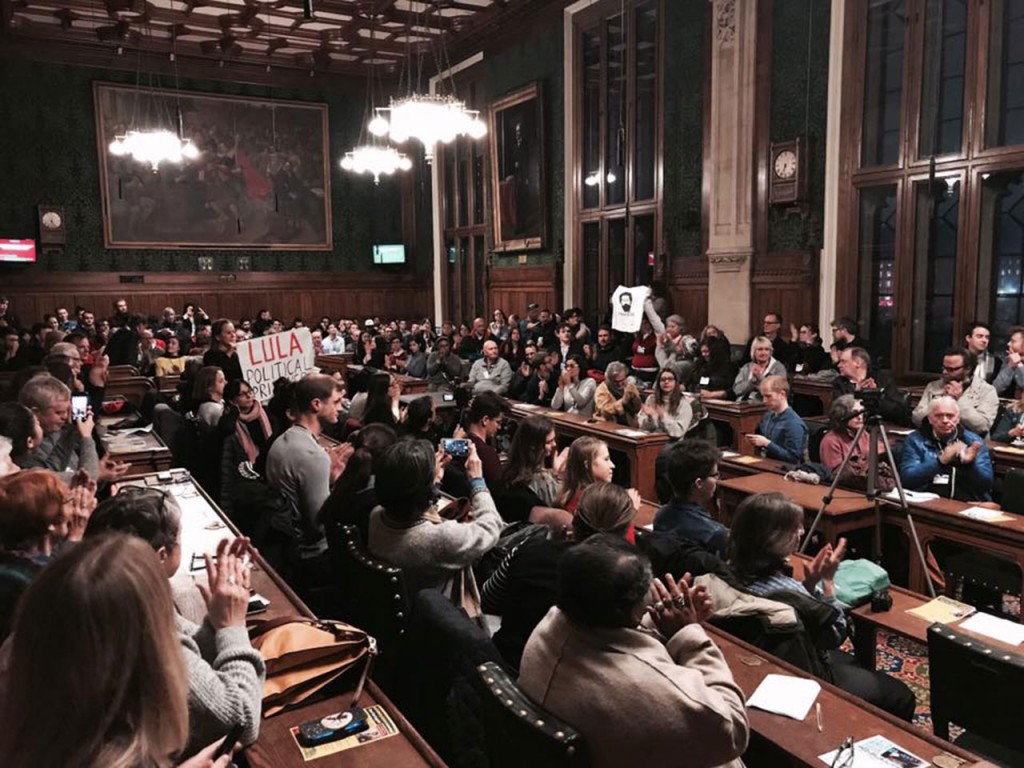 Acclaimed writer and director Jean Claude Bernardet said of Brazil in 2017: “We are watching the systematic dismantling of an emerging power”.

I’m here to speak as a resident of Brazil, as a UK citizen, and as a proud and committed member of our own Labour Party.

Brazil has been under a cloud of propaganda for some years now.

Having experienced the gap between what we were seeing on the ground and what was being reported outside, in 2014 a group of us created a media platform to provide a channel in English for Brazil discourse that was excluded from corporate narratives on the country.

Most of all, we did it out of concern for what was coming. It was already evident that something was wrong.

Right now, Brazil’s situation needs to be understood not as a series of individual newsworthy events but a continual escalation of a process – a slow motion coup.

I moved to Brazil when it was still very much the country of the future. At the handover ceremony that closed the 2012 Olympics in London, its GDP had just overtaken the UK’s for the first time in history.

What has happened since has been catastrophic.

2013 Revelations of US espionage against Dilma Rousseff’s Government and Brazil’s energy sector dovetailed with street protests which were turned against the Federal Government with the assistance of a hostile media.

2016 The illegitimate removal of Dilma Rousseff from office and violent repression of all resistance to it.

2017 Extreme, accelerated Neoliberal reforms that the Brazilian electorate had rejected four times at the ballot box, including a 20 year constitutionally enforced freeze on investment in public education and health.

2018 Operation Carwash’s politically motivated jailing of leading candidate Lula enabled a Neofascist victory and overt return of the Military to Government for the first time since 1985.

The fine detail of the process that got us here has been scandalous, and difficult for outsiders to grasp, not least because sectors of the English language media were actually eroding international solidarity for Brazil’s progressive forces at the very moment they needed it the most. They ran, uncritically, with lawfare’s own narratives which made the Workers Party, and the left as a whole, synonymous with ancient corruption schemes woven through the entire political system.

During the coup of 2016, a Guardian/Observer editorial all but calling for Dilma to resign was followed by a headline “Michel Temer: The Man Who Could Fix Brazil”. One of their writers contacted us privately to explain that neither he nor the then Latin America editor had any idea who was writing this material.

We have found that much of the commentary on Brazil in English is influenced by and connected to lobbies and think tanks such as Council of the Americas and Atlantic Council – organisations which warrant special scrutiny.

But even the Economist has now recognised the political motivation behind the Operation Carwash it once championed. Had this media epiphany come a few years earlier, lives may have been saved.

Rupert Murdoch’s Wall Street Journal went beyond normalisation and came out in shameless support of Bolsonaro, as they did Chile’s Augusto Pinochet decades earlier, no doubt excited by the living link between the two Neofascists, Chicago boy finance minister Paulo Guedes, and the firesale privatisations he will enact.

During the election some of Bolsonaro’s team wore shirts bearing not the face of their candidate, but of Margaret Thatcher. Chief Secretary to the UK Treasury Elizabeth Truss recently visited Brazil’s Millenium Institute – the libertarian think tank founded by Paulo Guedes in 2005, and whose alumni came to dominate economic and political debate in Brazil’s media since. Part of the Atlas Network, and affiliated to the Adam Smith Institute, Millienium is seen as a successor organisation to IBAD and IPES, the foreign funded NGOs which disseminated anti- government propaganda in the lead up to the 1964 Military Coup.

With refusal of televised debate, massive voter suppression, systematic, automated disinformation and illegal campaign funding, there was a maze of irregularities in an election that was neither free nor fair.

Most importantly, it needs to be plainly understood that Bolsonaro was placed in a winning position ONLY through the last minute removal of the leading candidate, political prisoner Lula da Silva, who was jailed for 12 years on a nonsensical charge by Bolsonaro’s own Justice Minister to be, in a joint operation in collaboration with the US Department of Justice.

Even this alone should be an international outrage.

And it gets worse, the chief of the armed forces General Villas Boas has admitted that he intentionally threatened the Supreme Court so that they would not release Lula. The court voted to deny him habeas corpus by a single vote, of a visibly frightened Rosa Weber, who explained that she was voting against her own opinion. This was a decision that changed the course of Brazilian history.

57 million voted, knowingly or not, for a synthesis of fascism, religious charlatanism and neoliberalism. 90 million didn’t vote for him, and no amount of votes is a mandate for the horrors he has advocated throughout his spartan political career.

Pinochet didn’t kill enough, and 30,000 need to be killed for Brazil to function, he once insisted. Where there is indigenous land, there are riches beneath it, he boasted. To raise these subjects now, educators face censure, the criminalisation of their profession, of critical thought, a terrifying modern McCarthyism.

But it is vitally important that our attention is not focussed solely on Jair Bolsonaro himself.

It is not to minimise Brazil’s internal politics and age old class struggles when we talk of foreign interference – after all it has been thus in the region for 500 years; the struggle between the Senzala and Casa Grande, the battle between two competing visions of government, that of sovereign development, and that of submission to foreign capital by what Eduardo Galeano called “the commission agent bourgeoisie”.

We of course shouldn’t forget that British industrialisation was paid for in no small part by exploitation of Brazil.

Until recently many of us believed that South America had finally broken from its colonial chains. We were wrong.

We could talk for hours about the sociological backdrop to this political moment, but that would have to include the decisive role of evangelical religion implanted from outside, and the undeclared war on corruption in Latin America, launched from the United States under the Bush administration, and expanded under his successors. At the peak of the so called Pink Tide, in 2009, then incoming Secretary of State Clinton, addressed the Council of the Americas and insisted that “the ballot box is not enough” in Latin America. Clinton talked instead of the need to work throughout the hemisphere to develop “strong, independent judiciaries”, just as lawfare strategies and networks of collaboration were being developed.

Brazil’s convulsions are not simply local troubles. Brazil’s democratic descent did not occur in a geopolitical vacuum.

There is now what former foreign minister Celso Amorim described as a wholesale war on Brazilian sovereignty, with not only the sell off of its massive reserves of Oil, minerals, water, and strategic companies such as Embraer and Eletrobras, but also the arrival of US Military bases on Brazilian soil for the first time since the 1940s. This is a war on the Brazil which stands up to exploitative free trade agreements, the Brazil that breaks patents in the public interest, the Brazil that broke free of the IMF and World Bank, the Brazil that displeased capital by seeking to invest the proceeds from its own natural resources into public education, health, and national development.

In 2016 the British chamber of commerce excitedly described Norwegian Statoil’s snatch of the massive Carcará oilfield as a “Viking conquest” – sealed while Rousseff was suspended from office, and powerless to intervene.

I’m sure everyone here would like assurances that our own foreign and commonwealth office will not abet a Neofascist Brazilian Government in any way, as it did during the 64-85 Military Dictatorship. During that time, under Edward Heath, the then UK Ambassador gave his enthusiastic support for the bloody rule of Emilio Medici, predicting that what he called a “benign dictatorship” would continue for “many years to come”. To that government we exported our own torture techniques, trialled in Northern Ireland, which the Brazilian secret police christened “the English method” – terrors that 50 years later are celebrated by Bolsonaro and his supporters. Meanwhile, Brazil’s 2016 putschists referred to Inquisitor Moro’s interrogations in pursuit of Lula as “the Tower of London”.

We need to watch the relationship between the UK and Brazilian governments very closely. No matter how good it may be for business, we cannot tolerate someone who threatens the criminalisation, expulsion, imprisonment, or worse, of social movements and political opponents alike, humoured, nurtured or protected, as “our bastard”.

I was asked in early 2015 by UK diplomats what I thought about the idea of them meeting with Jair Bolsonaro. At that point he was not a realistic contender for the Presidency and I explained in very frank terms why such a meeting would be unacceptable.

I doubt that my advice was heeded.

Brazil is the most resource rich nation on Earth, and as so often in history, human suffering is a detail that governments in the global north are prepared to condone in exchange for access. And too often we make an artificial distinction between state and corporate power.

As will become even clearer in the months and years ahead, what is being done to Brazil is a neo-colonial project, conducted in darkness, and hiding in plain sight.

We don’t want to study and understand the mechanics of what is being done to Brazil and the region now in 40 years time, we don’t have that luxury. We need everyone to know how this works now so that it can be resisted by those who believe in independence, in universal human rights, egalitarian principles, popular participation, social emancipation, and protection of the natural environment – it needs to be understood now so it can be resisted, fought, and ultimately defeated.

From outside we can pressure our own governments, boycott the companies and organisations, and disrupt the networks which have enabled this calamity to happen.

These pigs, and their project of societal, economic, environmental and cultural vandalism, will fail.

For the Brazil we love to win, an extraordinary movement of international solidarity needs to be constructed.

It is our duty to build it.