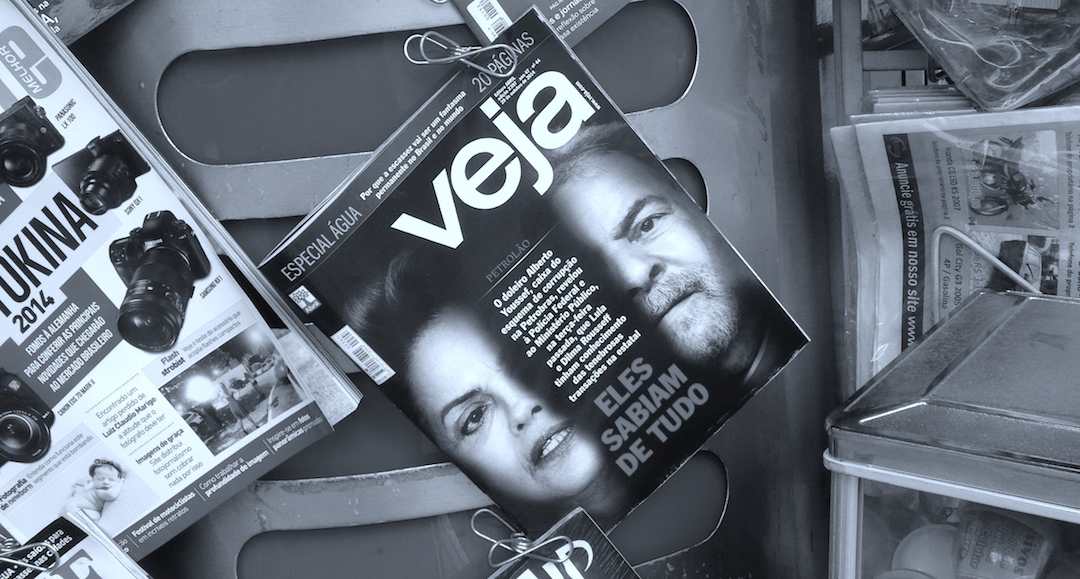 A toxic rag with an agenda that goes far beyond journalism. – Jon Lee Anderson, veteran reporter at the New Yorker.

Last week football legend turned senator Romário Faria made a special announcement to his 2 million Facebook followers. “On Thursday I found out from a Veja magazine story that I have millions of Reais in a Swiss bank account,” he said. “Obviously, I was very happy to hear the news and as soon as possible I will go to the bank to confirm that I have this account, withdraw the money and inform the Federal Revenue Ministry…. Since we are talking about Veja, if this information turns out to be false it won’t surprise anyone. If you read their story you will see that there is no reliable source cited… It is hard to find anything credible in this magazine.”

Romário, who supported Aécio Neves in the last presidential elections, flew to Geneva, Switzerland. He posted a selfie on Facebook saying, “This is annoying. I just arrived here in Switzerland and the bank is telling me I don’t have an account with R$7.5 million in it”. After confirming that the information presented in Veja was a fabrication, he asked his fans to go to the journalists who wrote the story’s Facebook pages and ask them who their source was. Hilarious trolling ensued and within 24 hours two of the three journalists had canceled their Facebook accounts. Immediately upon returning to Brasil Romário filed a libel lawsuit against Veja.

(Romário later published this document from the Swiss bank confirming Veja’s story to be false, and this confirmation from Brasil’s Public Ministry he was not under investigation as had been alleged. In context of the current mediatic-judicial-parliamentary coup attempt, Romário’s situation has struck a nerve.) 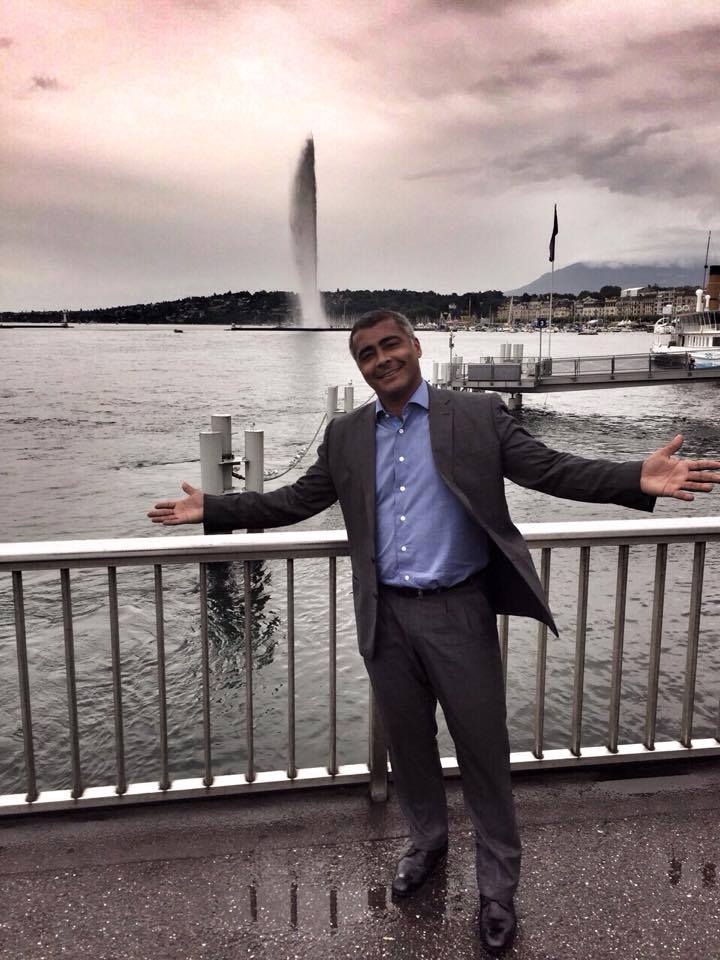 Romário’s reaction amused a lot of Brazilians, but the fact that the story had been fabricated in an apparent attempt to smear the Rio de Janeiro mayoral front runner didn’t surprise many. In a country with weak libel laws and low fines, Veja is one of the least reliable major news sources. The magazine, which caters to the interests of the conservative middle class, has a long history of slandering political rivals for corruption while heaping praise on corrupt political allies, most of whom, like Veja, have ties to the neofascist military dictatorship of 1964-1985. 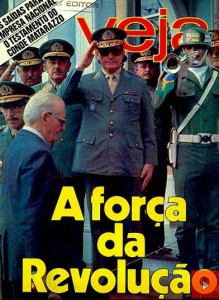 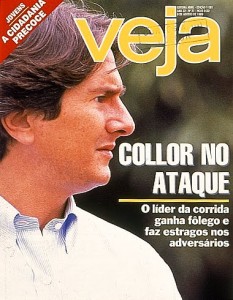 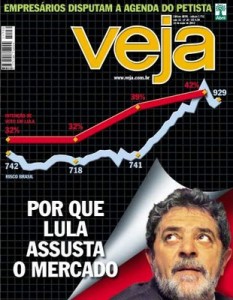 “Why does Lula scare the market?” – another of Veja’s notorious smear covers.

Veja was founded in 1968 and quickly turned into the country’s most popular news magazine. It referred to the military dictatorship as a “revolutionary government” and leaders of the outlawed university students and labor unions as “terrorists”. It was one of the main influences on the election of Brasil’s first neoliberal president, Fernando Collor.  Over the decades it has become known for cheer-leading Washington Consensus economics, conservative positions on social and racial policies, selective anti-corruption crusading and strong ties to the corrupt, ultraconservative PFL/DEM party.

As Emir Sadir, director of the Universidade Estadual de Rio de Janeiro’s Public Policy Laboratory says, “every country has this kind of extremist publication that prioritizes defending the ideas of the new American conservatives. They’ve inherited ideas from the Cold War era, specialize in attacking the left and repeat the same international headlines and silly, supposedly scientific articles about new medicines, skin treatments and psychological problems so that they can attempt to pass themselves off as family magazines.” 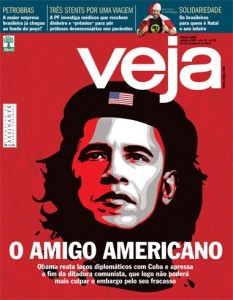 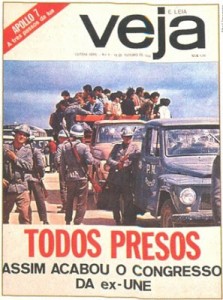 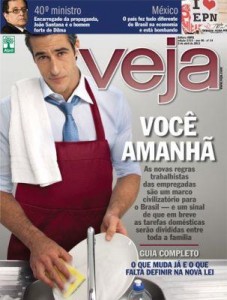 Last week, ex-president Lula filed a libel lawsuit against Veja for using hearsay to accuse him of taking bribes from Odebrecht construction company. The article was accompanied with a characteristic Veja cover photo of Lula frowning in the shadows.  In June, Veja journalist Joice Hasslemann was accused of plagiarism by 42 different print journalists. Last October, Veja was tried for electoral fraud and forced to immediately remove any online reference to a special edition released on the eve the Presidential elections that erroneously accused Dilma Rousseff and Lula of direct involvement in scandal involving the state Petroleum company. 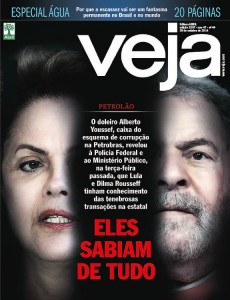 “They knew about everything” – Veja was convicted of Election Fraud for this cover, released two days before the 2014 elections. 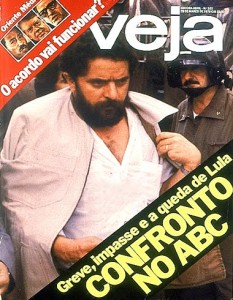 1979: “Lula Falls”, the first in over 35 years of negative cover images of Lula Inacio da Silva

Despite serious credibility issues Veja remains one of the most commonly cited sources on news from Brasil. Reuters and The New York Times wouldn’t treat Fox News as a reliable source, yet last month, Reuters cited Veja 7 times. During the week before the October 26, 2014 presidential elections the New York Times cited them in 6 articles, including repeating accusations against Dilma Rousseff that were tied to the illegal special edition that was ordered offline by the electoral courts. A key word search on the Times website reveals 121 articles that cite Veja magazine.   The ostensibly progressive Guardian wouldn’t use the Daily Mail as a reliable source but it regularly quotes Veja as well. 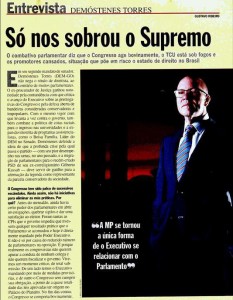 6 months before DEM party Senate leader Demosthenes Torres was kicked out of the senate for mob ties, Veja hailed him as an anti-corruption crusader.

Why do important publications in the North continue to cite Veja as an objective source on Brazilian news? As someone who’s hung around with a lot of foreign journalists during my 20 years in Brasil I would like to believe that it happens because of low salaries and short deadlines. With some major news companies now paying freelancers as low as $100 an article for online content I can understand why someone would just read a single, large circulation news source to piece together a quick article on a current event.  Another reason could be that the segment of the Brazilian population that Veja caters to – the conservative, upper-middle class – is also the group most likely to speak English and interact with foreign correspondents living in Brasil.

Veja’s parent company Editora Abril is one of the major players in the Brazilian media landscape, one of the “Berlusconi’s” referred to in the land of 30 Berlusconi’s report. I am not suggesting that it can or should be completely ignored by the foreign correspondents covering Brasil- reading Veja opinion pieces is a great way to learn the conservative, middle class viewpoint on any issue. I would like to suggest, however, that the quality of reporting on Brasil would improve if the English language news media would stop using it as a primary source for hard news coverage.