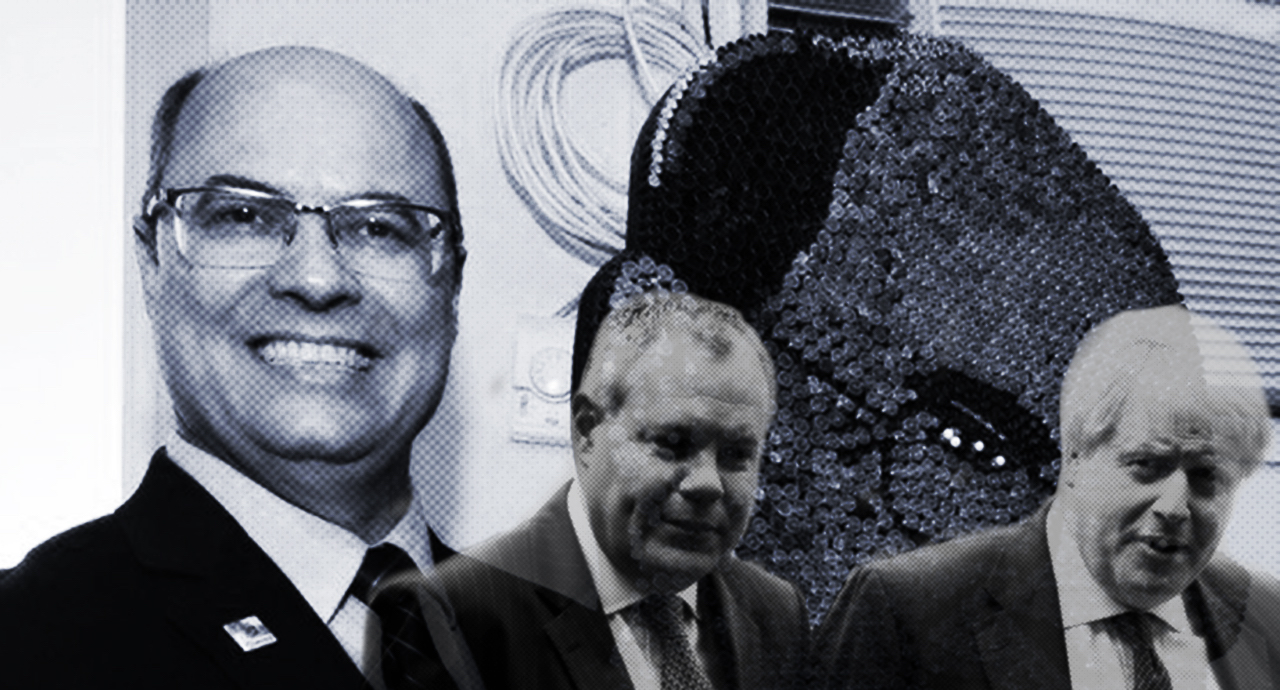 By Nathália Urban and John McEvoy.

As the Brazilian Amazon burned, edging the global climate towards an irreversible and catastrophic feedback loop, UK Minister of State at the Department for International Trade Conor Burns was in Río de Janeiro with the state’s governor, Wilson Witzel. Documents obtained under the Freedom of Information Act (FOIA) offer details of their meeting, and the developing ties between the governments of Boris Johnson and Jair Bolsonaro.

Conor Burns and Wilson Witzel met on 19 August 2019, as smoke pluming from the scorched Amazon turned day to night at 3:15pm across Brazilian cities. The burning of the Amazon, however, was not on the agenda. In fact, the issue was only alluded to in the final comment of Burns’ meetings in Brazil, which notes that “parts of the UK media alleged that the UK was not emphasising the environment enough during the Minister’s visit”. 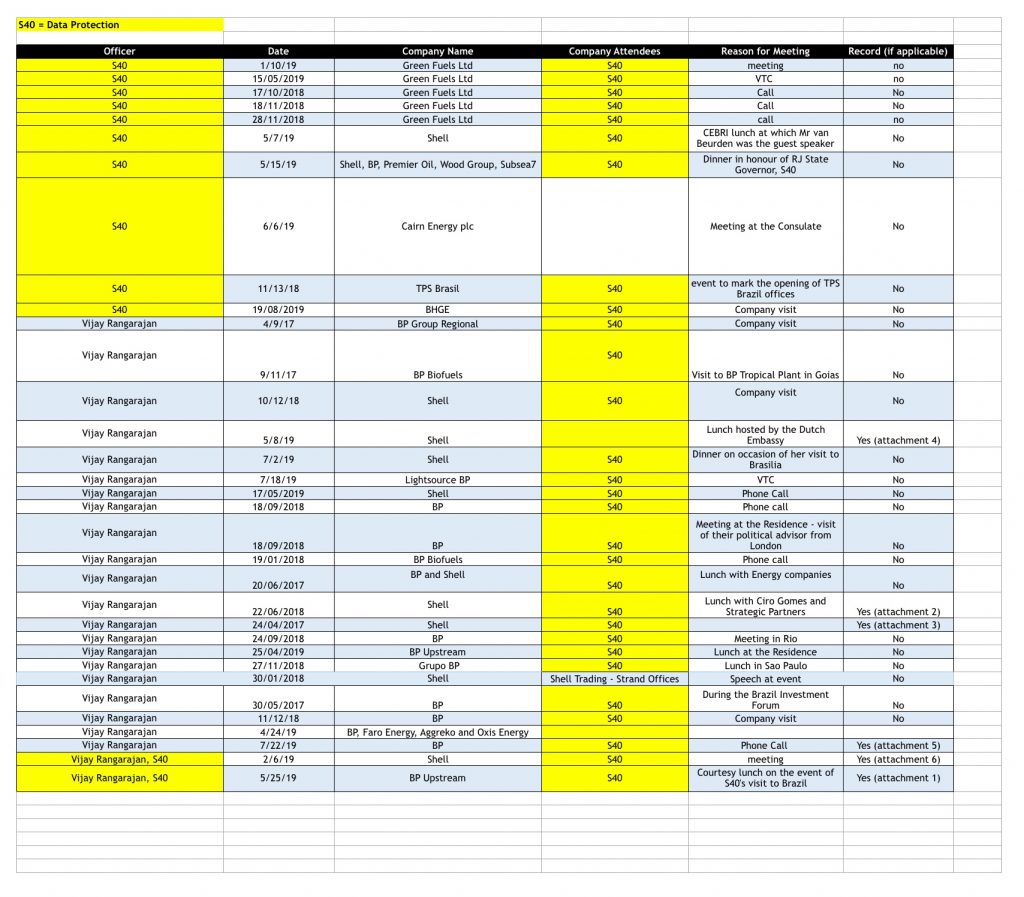 Yesterday I had warm and productive talks with the Governor of Rio @wilsonwitzel. This was my first meeting on my first overseas visit- showing the potential we see between our two countries. I invited Governor Witzel to London to sign an updated MOU. He accepted. @tradegovuk pic.twitter.com/DGMeNTcTx3

Witzel opened the dialogue with fawning words for former UK Prime Minister Winston Churchill, with whom the Río governor shares a penchant for violence. (In another meeting, Burns praised the Bolsonaro regime’s “economic reforms”, adding they were “reminiscent of Thatcher”). After the brief pleasantries, Witzel bragged of his “administration’s restructuring of the police leading to a 26% drop in the homicide rate”, adding that he “hoped for UK support on security”. Burns obliged, praising “the Governor’s ambition for… reducing violence” and pledging that the “UK stood ready to work together on a range of issues, including security”.

To be sure, Witzel’s administration has overseen a decrease in homicides in Río. The price of this, however, has been a campaign of police terror likened by veteran Brazilian journalist Luis Nassif to a politics of “genocide”. Between January and July, Río’s police killed 881 people – “the highest number in nearly two decades”.

After winning election in November 2018, Witzel – then an ally of president Bolsonaro – aired plans to recruit snipers to murder those suspected of carrying assault rifles in the city’s favelas. Within days, Witzel claimed the snipers “should not be held responsible for their actions” for reasons of self-defence. “The right thing [to do] is to kill thugs carrying rifles”, he said. “The police will do the right thing: take aim at [a thug’s] little head and… fire! Just to be on the safe side”.

In May 2019, Witzel posted a tweet while “flying over one of the most dangerous areas of Angra dos Reis” in a police helicopter. The video showed heavily armed police pointing assault rifles menacingly towards the favelas below. In the months that followed, Río police expanded their use of the ‘caveirao voador’ (flying skull), shooting indiscriminately into favelas and stoking terror of death from above. In the first six months of 2019, snipers in police helicopters “opened fire in 11 operations”.

In August, Witzel made headlines after effectively hijacking a hijacking. During what police described as a “psychotic episode”, Willian Augusto da Silva held thirty-nine people on a commuter bus with a number of fake arms. When da Silva finally stepped off the bus – after a period of almost four hours -, he threw his backpack towards officers and was immediately shot dead by police snipers.

Witzel was waiting in the wings nearby, ready to bask in the glory of more blood on Río’s streets. Within moments of the shooting, the governor descended in a helicopter; cameras were in place to record his triumphant entry onto the scene. Those on the bus were then hostage to an absurd tirade from the governor:

“Unfortunately society has unstable people who don’t have love inside of them, who don’t have faith in God… So I want you men and women to leave here with this mission of putting Jesus and God in people’s hearts so we don’t have any more episodes like this and any more loss of human life”.

Then, in September, Río’s security forces were met with country-wide disgust when Agatha Vitória Sales, an eight-year-old girl in a northern Río favela, was shot dead during a police operation. The blame was laid firmly at Witzel’s feet as the hashtag #ACulpaEDoWitzel (The blame is Witzel’s) trended across the country. In the same week, police helicopters fired multiple rounds into a school in the Maré favela.

As Brasil Wire reported in 2018, “Witzel wants to transform Rio into a showcase for the most radical security plans”. Aside from unleashing terror on Río’s poorest neighbourhoods, Witzel appears set on turning the city into a laboratory for advanced police surveillance.

Here, the UK is also offering its services. As part of its Prosperity Fund, the British government is developing a Smart Cities programme in Brazil. Part of this initiative entails facial recognition cameras, ostensibly designed to fight crime and facilitate the functioning of public transport in Brazil’s largest cities.

In his meeting with Witzel, Burns highlighted the UK’s “noted expertise on facial recognition” while discussing the development of Río’s security apparatus. Impressed, Witzel said he “had not planned to come to London so soon, but on reflection agreed to do so, suggesting late November”.

Late November turned into early November. After talking at a Shell-sponsored Canning House event on 6 November, Witzel visited Scotland Yard to discuss “the British monitoring system to combat and prevent crime”. The governor “exchanged experiences… and discussed an exchange between the military and civilian police in Río and the London Metropolitan Police”.

Biometric cameras were trialled in Brazil during the 2014 World Cup, and again in February at Río’s Carnival “after a spate of robberies” during the event in 2018. “It’s a fantastic tool”, claimed head of Río’s state police Rogerio Figueiredo: “It’s time that the police modernise”.

If biometric cameras harvest data detailing a higher incidence of crime among Brazil’s minority groups (a likely scenario given socio-economic drivers of crime in Brazil), this data could then be used to justify the over-policing of these groups – thereby producing more ‘evidence’ of a disproportionate incidence of crime among certain groups. In the hands of an overtly racist political establishment and expanding police state, this could become a lethal weapon.

The technology, moreover, is not totally reliable. In October, the American Civil Liberties Union (ACLU) found that “Amazon’s facial recognition technology falsely matched nearly 30 professional athletes to individuals in a mugshot database”. And as Globo reported in July, a woman in Río was falsely arrested and held due to mistaken identity by facial recognition cameras.

Socialist councilwoman Marielle Franco would have turned 40 in July, had she not been gunned down alongside her driver Anderson Gomes in 2017. In recent months, evidence has emerged tying the Bolsonaro family to her murder. Although he later apologised, Witzel was filmed cheering on stage in 2018 as colleagues tore in two a plaque in Franco’s honour.

In addition to the disdain that Witzel has shown to Franco’s memory, he was embroiled in another scandal about it. On 29 October, Rede Globo (the largest communications company in the country) announced during the Jornal Nacional that Jair Bolsonaro had been named in the investigation of the execution of Franco and driver Gomes. According to the report, those accused went to Bolsonaro’s condominium hours before the murder. The local security guard told the police that Élcio de Queiroz, one of the suspects, entered the condominium and said he would go to the house of then-federal deputy Jair Bolsonaro. The security guard added that when de Queiroz called the president’s house, “Mr Jair” authorised his entry.

Bolsonaro accused Witzel of leaking this information to the press to attack him in an early move ahead of the 2022 presidential election, adding that he was convinced that Witzel who put his name at the centre of the investigation. Without legal authorization, there is no reason that Witzel should have access to the investigation. However, Bolsonaro claimed that he learned that Witzel had access to the case during a dinner to commemorate the birthday of the Federal Court of Auditors (TCU), on October 9, when Witzel allegedly told him about it. Witzel denied leaking the information to the media.

The UK government thus appears to be co-operating with some of the most lethal elements of the Brazilian far-right and security apparatus. In this sense, the UK appears to be keeping with tradition.

Declassified documents show that, during the Brazilian dictatorship of 1964-1985, UK officials assisted the Brazilian authorities in torture. As a document dated 14 August 1972 from the British embassy details:

‘In this confidential letter on torture which I have sent by this bag there is a reference in para 6(iv) to the adoption by the Brazilians of “more sophisticated methods of interrogation”. As you know, I think, they have in the past been influenced by suggestions and advice emanating from us; but this connection no longer exists since early last year’.

More recently, Greenpeace found that Greg Hands – a minister in Liam Fox’s Department for International Trade – lobbied the Brazilian government in 2017 “to smooth the path for BP and Shell to secure oil blocks in the country’s controversial pre-salt region”.

BP and Shell, it seems, remain key factors in UK policy in Brazil. With Bolsonaro’s fire-sale of Brazil’s natural resources (and, for many, a habitable climate), transnational corporations are circling for the spoils. According to separate documents revealed under the FOIA, UK ambassador to Brazil Vijay Rangarajan has met with officials from BP and Shell at least twenty times since 2017 – ten of which were held in 2019. Records from such meetings are either non-existent or heavily redacted.

Tory policy in Brazil stands in sharp contrast to that of Labour party leader Jeremy Corbyn, who congratulated former president and political prisoner Luiz Inácio Lula da Silva on his release this month.

For some, the battle for Britain’s foreign policy will be the defining feature of the UK’s coming election.