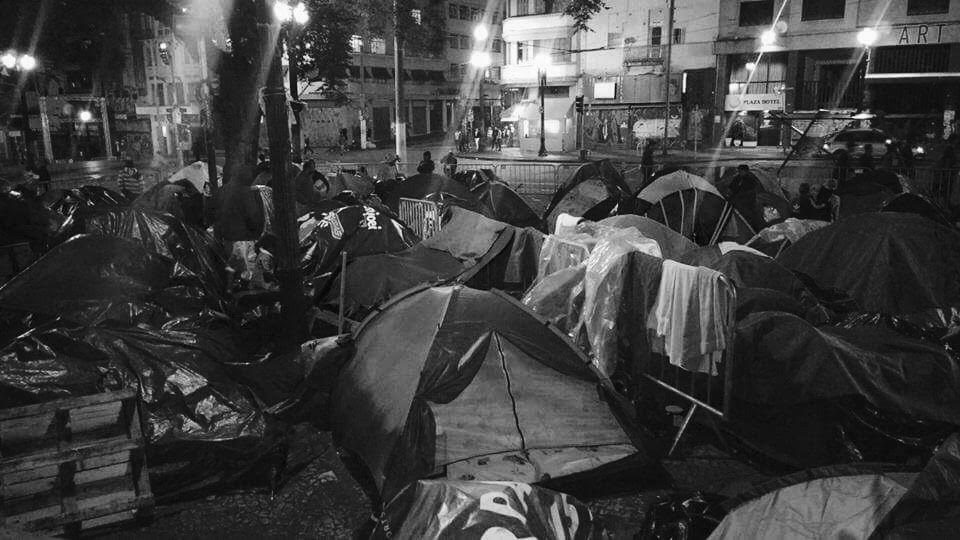 On May 1, a former federal police building that was occupied by squatters caught fire and collapsed on Paysandu square, killing an undetermined number of people and leaving 455 homeless. 34 days later, dozens of families are still sleeping on the street in tents, across the street from the rubble. The following testimony is from Benedito “Dito” Barbosa, a housing rights lawyer São Paulo City Director of the Central de Movimentos Populares (CMP) social movement federation, who is advocating  for the victims.

For 34 days the camp set up on Paysandu square after the Torre de Vidro tragedy, when the building caught fire and collapsed in the early morning of May 1, 2018, has been marked by  suffering and abandonment.

Many families that are camped out at the location are still trying to prove that they were victims of that terrible tragedy and are trying to get official recognition from the Mayor’s Office. Other families who were registered with the City and are receiving emergency housing subsidies are saying that the value, around $110 USD/Month, is not enough for them to rent anything. These families are asking for the Housing Ministry to rent an empty building downtown that can house everyone. They are still waiting for an answer.

The fact is that these families continue on the square, spread out in around 150 tents – men, women and children who should have, from the first hours after the tragedy on May 1st, received all of the support necessary to prevent them from being in this current situation.

In the intense cold, rain and drizzle of Winter the conditions are precarious and the suffering of these families is even worse.

How long will the Municipal, State and Federal government authorities leave these families in this situation? Enough neglect and omission, a solution is urgently needed. The Mayor’s Office and the other authorities have to respond to the demands of the families camped on the square.