“The United States strategists are firmly in agreement with the foreign policy guidelines advocated by candidate Marina Silva. If she is elected, it will be the victory of a diplomatic model similar to what Brazil used in the 1990s,” says Samuel Pinheiro Guimarães, former Foreign Ministry secretary-general during the Luiz Inácio Lula da Silva government.

Together with former Foreign Minister Celso Amorim and adviser Marco Aurelio Garcia, Pinheiro Guimarães was part of the troika responsible for planning the South-South focused diplomacy applied between 2003 and 2010. These strategies “were continued from 2011 during the tenure of President Dilma Rousseff, who adopted clear policies regarding Mercosur and against American Intelligence in the NSA scandal, and resisted pressure to buy American warplanes, “said Pinheiro Guimarães.

In the government program presented a week ago by Marina, proposals are made that, in some cases, are antagonistic to those of the governments of Dilma and Lula, and criticism is made of “ideological” and “partisan” diplomacy during the three PT administrations.

Ambassador, are we facing the risk of a returning to the diplomatic principles that dominated the second half of the 90s?

I believe that the candidate Marina Silva represents an attempt to annul the progress achieved in these 12 years. She and the sectors she represents are seeking another model of international insertion.  It is a school of thought which can be understood as an attempt to weaken Mercosur under the pretext of opening it to the World.

Is this the end of any aspirations for an independent diplomacy?

Up to now the only time I’ve heard Marina use the word independence was in regards to Central Bank independence  (laughs).

Is Washington betting on Marina or Aécio?

I’m not in Washington to say what they think. Now, there are US interests that were damaged during the Lula and Dilma governments of Lula and Dilma, and it is clear that the candidate they like is Aécio Neves.

The American Embassy has adopted a very low profile in the elections, but this should not be confused with the fact that they are unconnected to what is happening. If Aécio gets knocked out out of the game, the United States will be inclined to back Marina, by pragmatism and because she represents the opposite of PT. Furthermore, she is someone without a clear coalition and is said to have good contacts in the United States and that appears to be open to the idea of dismantling the state, reducing its capacity and its international autonomy. The US has a vested interest in dismantling Mercosur and resuming the PSDB party project. Make no mistake that what is at stake in this elections is the return to total or partial privatizations of Petrobras, Banco do Brasil and the national development bank, BNDES.

How will Marina dismantle Mercosur?

I think they will start by eliminating the clause requiring that Mercosur countries jointly negotiate free trade agreements with other trade blocs. This point, which they haven’t been able to overturn yet,  that comes from the Asunción Treaty (signed in 1991 during Mercosur’s formation).

What would happen after that?

Once this clause is deleted the path will be open for agreements between Brazil and the European Union without the participation of the other four members of Mercosur. But if the clause remains standing, a pact between the Mercosur and the European Union could be just as dangerous. This deal has already begun, but is moving very slowly. The process will likely accelerate during a potential Marina Silva government.

What would be the consequences of an agreement with the EU?

There would be many. One of which would be a considerable reduction in import tariffs on European industrial products and this would affect our our factories. I’ve been saying for a long time that this approximation, which pleases Marina’s economists, is the initial step towards the end of the Mercosur.
In short, the signing of an agreement between the two blocs will mean an extraordinary advantage for European companies that could export to here tax-free, while there will be not be great benefits for South American exporters.
If this agreement occurs it will affect another fundamental Mercosur institution, the Common External Tariff, set for third countries. If this happens, the customs union, a central quality of Mercosur, is pulverized. Once we get to this hypothetical signing of a free trade pact with Europe, the United States will reappear.

The Brazilian interests groups who feel represented by Marina speak only of an agreement with the European Union out of opportunism due to the good image of Europeans who are viewed as wonderful and well educated as a means to open the doors of the first world. Rhetoric will be used to hide how the deal would be detrimental to us. Anyone who wants to know what to expect with this agreement can ask the Greeks and Spaniards about how Old Europe treats them.
Now all this brings us to the beginning of this conversation, which is the United States. Why? Because once the EU-Mercosur pact is signed, on the next day Washington will want equal business conditions with the Europeans and demand a free trade agreement. The United States never forgets the spirit of the FTAA (Free Trade Area of the Americas).

At the beginning of the last decade, FHC sanctioned Pinheiro Guimarães for publicly opposing the signing of the FTAA, which was eventually buried during the Summit of the Americas held in November 2005 in the Argentine seaside resort of Mar del Plata, thanks to a front formed by Presidents Lula Néstor Kirchner, Hugo Chávez and Evo Morales and supported by other South American leaders to an astonished George Walker Bush and his ally, the Mexican Vicente Fox, former manager of Coca Cola.

The FTAA could be recreated under another name. It is possible that Marina, FHC and neoliberal intelligence recycle the project?

Everything leads me to think that the American project of hemispheric trade integration, of elimination of barriers and passing laws that favor their multinationals remains in place. All you have to do is observe the Pacific Alliance (with Mexico, Colombia, Peru and Chile).

I understand that the United States will resume the proposal if Marina wins. Her foreign policy positions reflect the aspirations of the business sector, banks and big media conglomerates that show a certain nostalgia for colonial dependency.

With Marina will we return to the pre Mar del Plata past?

The candidate seems to be very open to these ideas. But the interesting thing is that she is not alone.
She is surrounded by people who express this pre Mar del Plata spirit. I refer to Professors André Lara Rasende and Eduardo Giannetti da Fonseca and Maria Alice Setubal, from Itaú Bank. Furthermore it seems natural that after the first round she will be joined by other people with similar ideas who are currently supporting Aécio Neves, for example Arminio Fraga and Pedro Milan.

Do you believe that, despite the rise of Dilma, Marina will be the future president?

No.  I believe that despite all this commotion, President Dilma will be reelected.

In this case, what are the foreign policy goals for the second term?

Firstly, it should be mentioned that foreign policy did not change significantly between Lula and Dilma despite the differences in personal style. They both worked to strengthen the BRICS investment bank and were firmly in favor of Venezuela’s entry into Mercosur despite the fact that United States openly expressed its interest in replacing the Venezuelan government, a stance that is echoed in the Brazilian press, Fernando Henrique Cardoso and PSDB party leaders.

In the second term, the President should aim to reduce the country’s external vulnerability, dependence on speculative capital for the payment of debt and its related vicious circle which increases interest rates. The idea that high interest rates fight inflation is a myth.

Are you suggesting that the diplomatic alliances should continue but changes are needed in the international economic strategy?

Yes, I will end my commentary by by saying that, in the second term,  President Dilma government will have to work to diversify our trade to reduce vulnerability due to the growth of exports of primary products whose prices are defined abroad. When I say I believe in diversifying  in am talking about increasing industrial exports because Brazil runs the risk of succumbing to regressive  agriculture specialization and mineral production, accompanied by a contraction of the industrial sector and atrophy of our technological capacity. 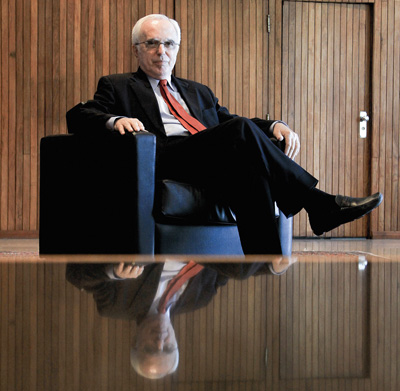