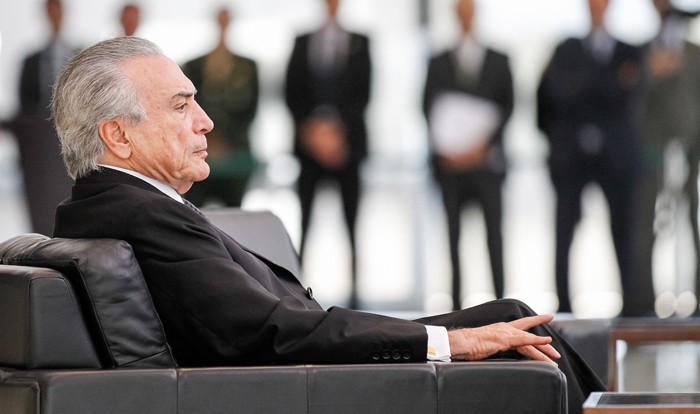 On October 10, non-elected Brazilian president and former military dictatorship official Michel Temer held a $30,000, publicly funded banquet for his allies in the lower house. The event commemorated the launching of a constitutional amendment called PEC 241- referred to as the “End of the World Amendment” by its critics- an enforced Austerity plan which will freeze public education and health spending for 20 years regardless of population increase. The irony of Michel Temer holding a lavish banquet for a group of Brazilian elite to commemorate spending cuts that will disproportionately affect working class and poor people of colour was not lost on the Brazilian population, who already witnessed the interim president raise judiciary salaries by R$57 billion while the Supreme Court was deliberating whether to permanently install him as President.

Article 212 of the 1988 Brazilian Constitution currently guarantees that the federal government allocate a minimum of 18% of its tax income to public education, although during 13 years of PT government the percentage allocated was frequently higher. Constitution amendment 29 stipulates that state and city governments contribute a minimum of 15 and 12% of their income to public health, and the federal government is required to, at minimum, maintain the previous years’ spending while increasing it by the level of GDP growth averaged over the previous 2 years. Although these two items make up only around 7,25% of the budget, non-elected president Michel Temer, his cronies in the former military dictatorship parties PMDB and DEM and their allies in the PSDB party argue that cuts in these areas should form the basis of their debt reduction strategy. Despite the fact that Brazil has a lower debt to GDP ratio than other countries that are not currently implementing similar structural adjustments such as Germany, Japan and the US and despite holding the world’s 10th highest foreign reserves, Temer seems to believe the orthodox economic dogma that servicing financial institutions is more important than education and health for the poor and working class.

When Lula Inacio da Silva took office in 2003, health and education spending was restricted by IMF conditionalities incurred through loans taken out by the Fernando Henrique Cardoso administration. In 2005, Brazil liquidated it’s debt early causing layoffs in the IMF, and during the remainder of his presidency Lula doubled education spending and increased public health spending by around 25%. These annual social spending increases continued during the first 4 years of the Dilma Rouseff administration. Public education spending rose from $R30.9 billion to R$102.4 billion and Health spending rising from R$59,4 billion to R$102.6 billion between 2006 and 2015, when Dilma Rousseff caved in to PMDB party demands in a desperate attempt to avoid being deposed in a coup and dropped spending on both by around 10%. A recent Carta Capital articleshows that if PEC 241 had been in place during this time, the Education and Health budgets would have been roughly a quarter and a half of their current levels, respectively. Despite the increased funding for education during the PT years the Brazilian public education system is still woefully underfunded. Unlike in developed nations, most brasilian children only attend school for half a day, choosing between morning, afternoon or night sessions. Most teachers teach two or even three sessions a day without adequate time to prepare lessons. Although the Brazilian public health system is a world leader on some disease prevention and treatment, such as HIV and Chagas (and unlike the US provides universal coverage), it is also still woefully underfunded compared to public health systems in developed nations.

According to the Economist Eduardo Fagnani, from UNICAMP University,President Michel Temer seems to be saying that it is no longer possible to meet the democratic needs of society so the structural adjustments will be made on the backs of “the workers, the poor and the destitute”. Although he agrees that the debt, currently at 48% of the GDP, is a problem, he says it could be easily tackled by addressing three factors that drain R$1,2 Trillion per year from the Brazilian economy that are completely ignored by the current government: 1) unusually high interest rates (R$500 billion/year); 2) Tax breaks for corporations and the rich (R$300 billion/year); and 3) Tax dodging (R$400 billion/year). Furthermore he adds that Brazil is the only country in the world that doesn’t charge a tax on stock dividends, which could provide R$50 Billion in additional revenue per year.

On October 10, the date of the first congressional vote on the constitutional amendment, a coalition made up of the Brazilian Political Economy Society, Forum 21, Fundação Friedrich Ebert, and the Plataforma Social Politico (Socio-Political platform) released a 60 page document called “Austerity and Retrocess: Public Financing and Fiscal Policy in Brasil, that warns of the negative effects of amendment 241 on the Brazilian poor and working class and provides a series of recommendations on tax reform that, if implemented, could eliminate the debt problem more efficiently than through health and education cuts.

On October 10, Congress voted overwhelmingly in favour of initiating the constitutional amendment, along party lines. The center left/left coalition led by PT, PC do B and PSOL provided the majority of the 111 votes against the measure. The two largest social movement and labour union coalition federations, Povo sem Medo and Frente Brasil Popular, announced a series of nationwide protests against the proposed amendment and during the vote a group of students occupied the presidential cabinet offices in São Paulo before being brutally repressed by a military police force which has just had the requirement for search warrants removed by Presidential decree.

Whether PEC 241 passes the required second house vote, two senate votes and survives the legal challenges underway, which will eventually be reviewed by the same kangaroo supreme court that illegally removed Democratically elected president Dilma Rousseff in what both President Michel Temer and former House leader Eduardo Cunha now admit was a coup, is yet to be seen.