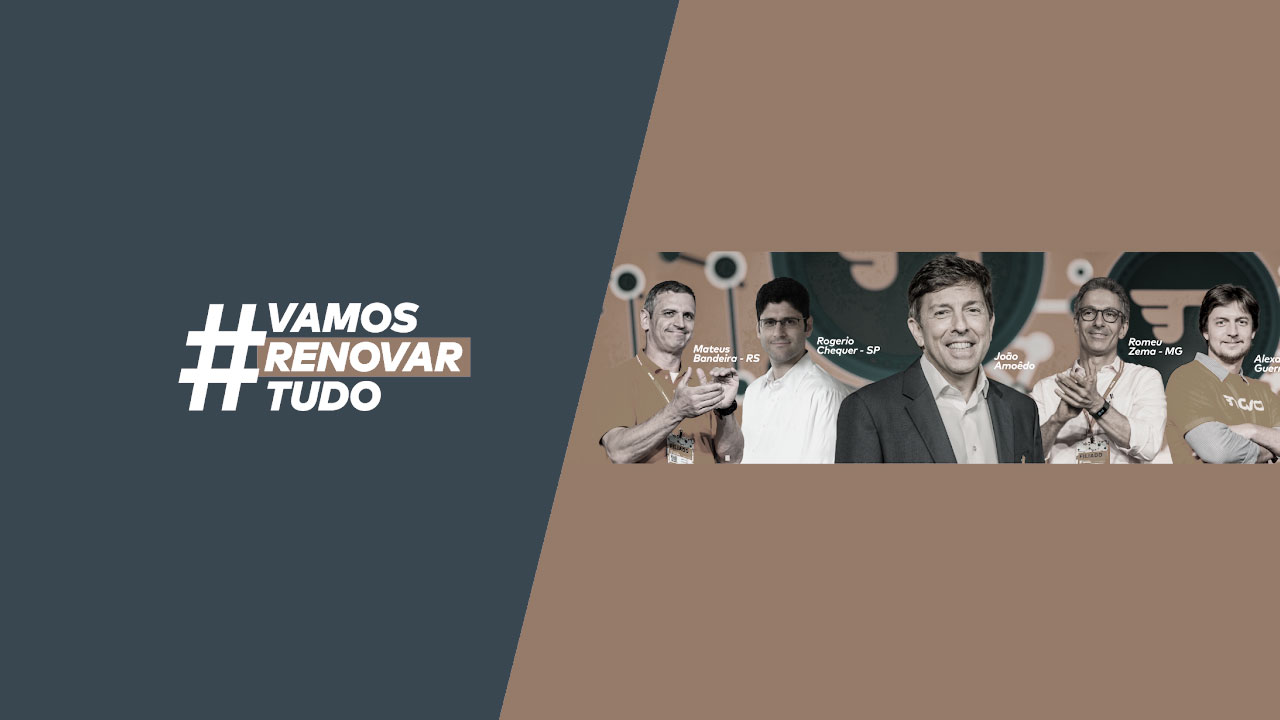 Initially and opportunistically presented as if emerging from the protests that had swept Brasil that June, its libertarian, minimal state messaging was in stark contrast to the demands of those on the streets. These youngsters were depicted as “the opposite side to the black blocs” and instead of improving, they proposed to abolish public health and education altogether, in one of the world’s most unequal countries.

There’s nothing remotely new about the ideology of Partido Novo, but in October it will field a Presidential Candidate for the first time, a former banker with a R$450m fortune, João Amoêdo, who insists that reducing inequality isn’t the way to fight poverty. Advocating long discredited trickle down economics, and echoing economic rhetoric of the Dictatorship era, he maintains that generating growth, and redistributing wealth are mutually exclusive. Currently polling at around 1-2%, Amoêdo also says that employers should have the right to discriminate against women over wage equality – “The state should not interfere”. Novo’s adherence to Neoliberal dogma would be almost comical, were it not for the tens of millions it would plunge into extreme poverty. It is unique in the field as being the party which openly advocates taking Michel Temer’s wildly unpopular post-coup reforms even further.

Novo’s candidate for Governor of São Paulo is Rogério Chequer, the US hedge funder turned activist who led the Vem Pra Rua campaign for Dilma Rousseff’s illegitimate ouster that, along with the less discreet MBL, provided the green and yellow appearance of majority public support for the Coup of 2016. Partido Novo has also attempted to prevent the Workers Party candidate Lula da Silva from being able to run for President in 2018.

The “New” Party is perhaps the worst of Brazilian politics, including Bolsonaro. By Luis Felipe Miguel

Partido “Novo” (sic) is an illustrative phenomenon. It allows us to evaluate how changed and enlightened our bourgeoisie is.

The party’s foundation seems to answer Itaú Unibanco’s desire not to pay any more tolls for the traditional political elite, and rule directly.

A party, let us say, that is militantly anti-Bonapartist. “All power to the bourgeoisie.”

With a glittering multimillionaire squad at its command, “Novo” wanted to be the herald of the ultraliberal creed, in its most decontaminated and uncompromising form. It would be a showcase of intellectual sophistication, managerial competence, and all-round honesty -as not tempted by the corrupt ethos of the political elite- of our capitalist class.

As a further demonstration of the seriousness of the Party-Company, a “selection process” for possible candidates was instituted. You only have the right to wear Novo’s orange shirt if approved by a bank, which evaluates  your resume and applies a written test. (It is also necessary to pay a fee of 300 or 600 reais depending on the position, which is non refundable. “Novo” accepts cards.)

Now a presidential candidate, João Amoêdo, the inspiration, chief and principal shareholder of “Novo” gains more visibility – data indicates that he invested more than 4 million reais in the party, while none of the other associated bankers put more than 250 thousand. And who is he?

Instead of the sophisticated libertarian intellectual who was promised, we have a troglodyte in a suit and tie, who mechanically repeats his profession of faith in the virtues of the market, indifferent to human consequences, unable to see as people those who are thrown to the margins. The state can not intervene even to prevent the most glaring injustices, public services must be abolished, everything must be privatized. You can not tell the difference between Amoêdo and Flávio Rocha (Boss of Richuelo clothing chain, once lauded as potential Presidential candidate), for example. Both are reproducers of the same narrow rhetoric.

In fact, the market fundamentalism of Amoêdo and the Christian fundamentalism of Cabo Daciolo, however different they may appear, indicate the same inability for complex reasoning and the same adherence to dogmas invulnerable to the clash with reality. I feel more sympathy for Cabo, immersed in his own unreason, than the banker, who takes advantage of his own rhetoric and with whom we never know where fanaticism ends and calculus begins.

I said that Amoêdo is a troglodyte in a suit and tie, but it’s not like that anymore. On entering the campaign, he went on to wear a polo shirt and sweater. His website wants him to be called “João.” (Laughs.)

But it’s not just the image. The libertarian doctrinal rigidity did not resist realpolitik and today, “Novo” is ready to accept the defense of censorship, the limitation of individual rights, traditional conservatism. Their candidates, those who have paid all the fees and passed the rigorous selection process, seem to have come from the ranks of the Bolsonarian shock troops.

Ricardo Salles, one of the party’s main bets for the Chamber of Deputies in São Paulo, chose a candidate number that alludes to the caliber of rifle, and has distributed campaign material which suggests shooting leftists. Diego Dusol, candidate for Federal Deputy in Paraíba, promises to make abortion a “heinous crime” and completely liberate access to weapons: “More than a rifle, Farmers should be able to acquire a Tank” (literal citation of his campaign material).

This is “Novo”. Perhaps it is the worst thing that exists in Brazilian politics today. Even worse than Bolsonaro. Spoiled puppies of the Brazilian bourgeoisie, playing politics and finding themselves immensely superior to the rest of society. Unlike Bolsonaro, they do not even suspect how crude they are. 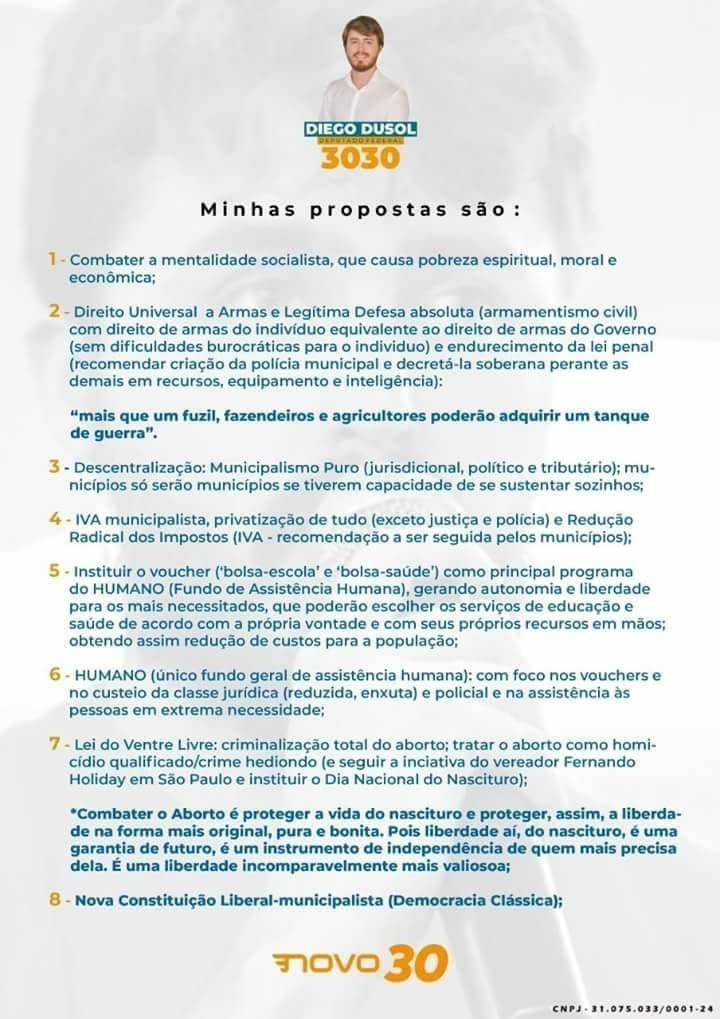 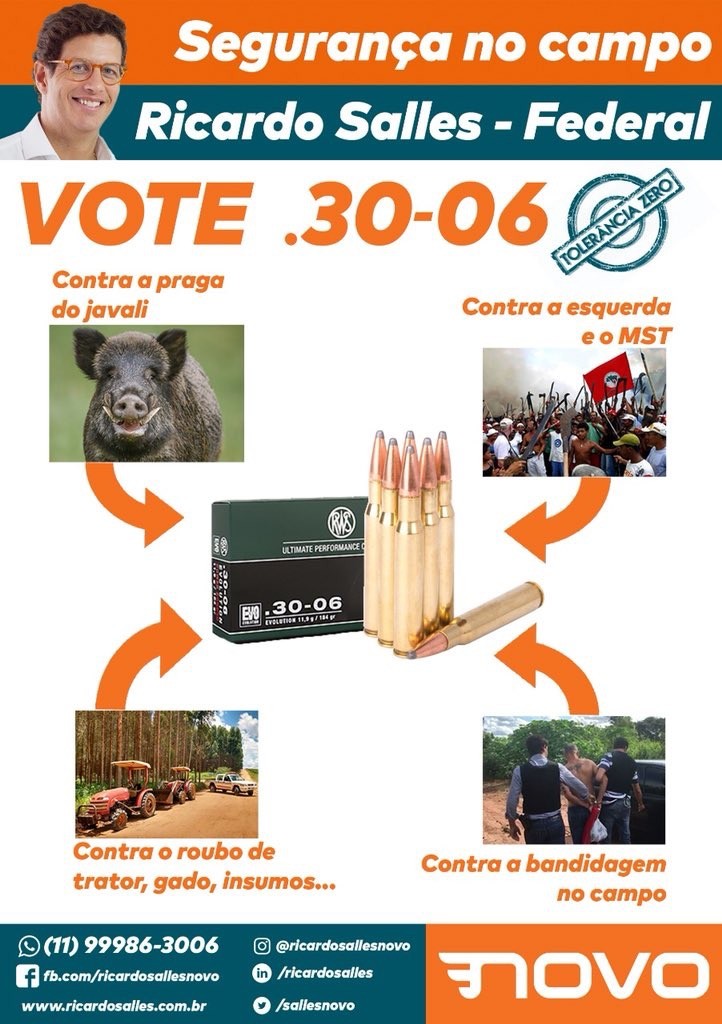