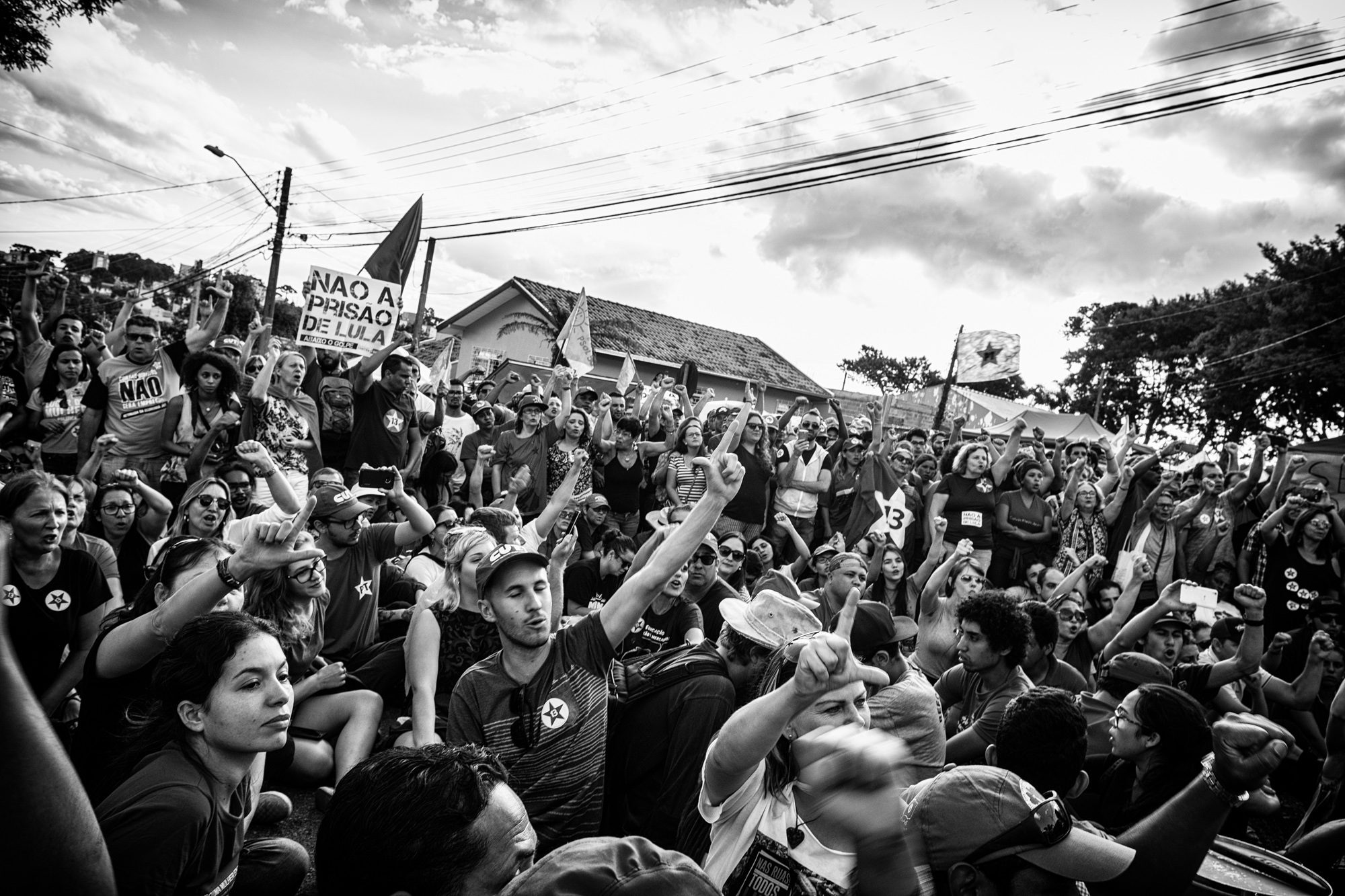 “Our weapon is our vote….We need to elect people who are committed to the working class, instead of their own individual interests or mediocre vanity,” says MST leader João Pedro Stedile

The Landless Worker’s Movement (Movimento Sem Terra/MST), is the largest social movement in Latin America, with around 1.6 million members in all 26 states of Brazil. Under the rallying cry of “occupy, resist produce”, it’s members have legally squatted on and gained deeds for approximately 400,000 family farms in its ongoing fight for agrarian reform. In the following interview, João Pedro Stedile, the most vocal of the MST’s 54 national directorate members, says that electing a president and lawmakers who are committed to the working class is the best way to overturn the setbacks that crippled Brazilians basic access to human rights such as as health, education, and safety. Stedile spoke with Brasil de Fato newspaper about Brazil’s elections and the political conjuncture, arguing that not voting will only benefit those who want to keep the country in a state of crisis. The original article, which has been edited for readability, can be seen here. – ed

Brasil de Fato: How important are the upcoming elections?

João Pedro Stedile: The October elections have historical significance for the working class and the people in general. There have never been elections in such a clear context of class struggle. On the one hand, the bourgeoisie needs to elect their president and members of parliament to legitimize the coup and continue implementing their Machiavellian plan for four more years, based on putting all of the weight of the economic crisis on the shoulders of the working class. So they have to keep removing workers’ rights, dismantling labor laws and the pension system, and appropriating public funds that should be invested in housing, agrarian reform, education, and health. They also want to keep handing over all our national wealth to their allies: foreign capital and the United States government.

On the other hand, our side wants exactly the opposite: we have to elect Fernando Haddad and a strong parliamentary caucus to overturn all measures that were implemented by the golpistas. Therefore, the people should base their votes on class. The masses were not able to mobilize enough to defend Dilma [Rousseff]’s government and now, as they are defeated by unemployment and social inequality, they are having problems organizing major demonstrations. So our weapon right now is our vote. And this is why it has to be a class-based vote. It’s only with our own representatives that we will be able to start a new project for Brazil, for the people, with the necessary structural reforms.

What kind of reforms?

We have to start with the economy, to restart an industrialization process for the country and garantee employment and income for workers. We need a tax reform and more controll over banks and interest rates. We need a media reform, agrarian reform, and education reforms. We cannot forget the mid-term goal to create a constituent assembly to promote a substantial political reform and a judiciary reform.

What should voters bear in mind while chosing their congressional representatives?

In addition to electing [Fernando] Haddad and state governors who are committed to the workers, we obviously have to make sure we elect a parliamentary caucus, both for Congress and the Senate, that is fully committed to the working class and to a project for changing the country. I know that we have very good candidates in all states, working class candidates, experienced comrades, people’s leaders, who have proved their commitment to workers. These are the ones we have to elect. People who are experienced in class struggle. People who are committed to the working class, instead of their own individual interests or mediocre vanity. The people must know who has been with us during the strikes, occupations, struggles, and street protests. Likewise, we also have to denounce the candidates who are only committed to the interests of the bourgeoisie and to the looting of public coffers.

What Congress’ role in pushing the federal government to focus on quality public health and education?

The next Congress [that will be elected in October and take office in January] must be made up of officials who encourage people’s organization and mobilization, and who will use their term for this purpose. The battle between the two projects that I mentioned earlier will be fought on the streets. The parliament is just a reflection of what will happen on the streets. This is why we need parliamentarians who fight, who mobilize, who have the courage and determination to explain to the people that power is not only in their representation, but rather in popular mobilization forces.

The future Congress should be a space to complement a people’s government. It should be able to help call popular plebiscites to repeal all the measures implemented by the coup architects. It should help overturn Constitutional Ammendment 55, which limits public spending on health, education, and agrarian reform. A Congressman who gets elected with 200,000 votes but is unaable to mobilize 100 people to defend our rights, Petrobras, Eletrobras, and our land and wealth is good for nothing.

How can the people contribute to a fairer Brazil starting in 2019?

We must explain to the people how important this election is. We have to explain that the project for the country for the next four years will be decided on October 7, and this is why we cannot hesitate. Everyone is angry at politicians in a general sense. But that is because most politicians represent the bourgeois or themselves – the rich and privileged who take over parliamentary power to push their own class-based agenda. Even Globo [Brazil’s largest media conglomerate] bad-mouths politicians all the time in a broad sense, but does not mention that those who are guilty are the capitalists, the bourgeois. This is precisely meant to mislead the people.

We must explain that abstaining or casting blank ballot in this election means supporting the coup; it means voting for things to stay the same. It’s a disengaged vote, even if they say they don’t believe in any candidates.

We have to vote for someone who will promote change in the parliament, in state governments, and vote for Haddad, who was appointed by Lula and is the only one who can face and defeat the coup-plotting bourgeois.

The people must understand that they will be voting for gas prices and for sharing Petrobras revenue – will the money be spent on education or go to American stock holders? They will vote to have money for hospitals, vote for a new security policy. The best security is employment, income, and education for all. Police forces and the Army don’t solve anything. In Rio de Janeiro, people are seeing firsthand that the clampdown is just part of the violence, and not a solution.

The people will vote to decide whether they want the social control of the judicial system, or whether the judges can keep earning R$30,000 a month , plus housing allowance, clothing allowance, book allowance, taking 2-month vacations, while the people don’t have a penny to their names.

What should activists do during the coming period?

Well, as we are in the middle of a radicalized class struggle, while also facing a huge economic, social, environmental, and political crisis, that means the struggle will go on for a long time until we are able to overcome this crisis over the next few years with measures to protect the people.

Therefore, activists must roll up their sleeves and be completely engaged to elect good governors, dedicated parliamentarians, and Haddad.

After October, we must keep mobilizing and using the methodology of the People’s Congress, keep holding people’s meetings in every neighborhood and every city, calling the people to discuss a new project for the country. From October through December, we must discuss all the changes that have to be made, in the economy, industry, agriculture, the organization of cities, in health, education, agrarian reform, etc., so that the people can present their ideas and clearly understand what is necessary to change first– and soon. Over the next few months, we must promote debates all over the country, with all grassroots support.

And then we must present our proposals to the new elected officials – at the state and national levels. Then, starting in January 2019, with Haddad, we must discuss new ways to promote people’s participation in government. We don’t need more governments for the people; now we will only tackle the crisis if it’s a government with the people. And to do that, we need to organize people’s participation in government, through popular plebiscites, referendums, consultations, sectoral committees, and huge mass mobilization efforts to push for the needed change.

The next cycle will be a cycle of struggle, a lot of discussion, and great mobilization. The worst is over now – the coup. Now it’s time to encourage the people to vote, to engage, and to build a new project, by the people, for Brazil.