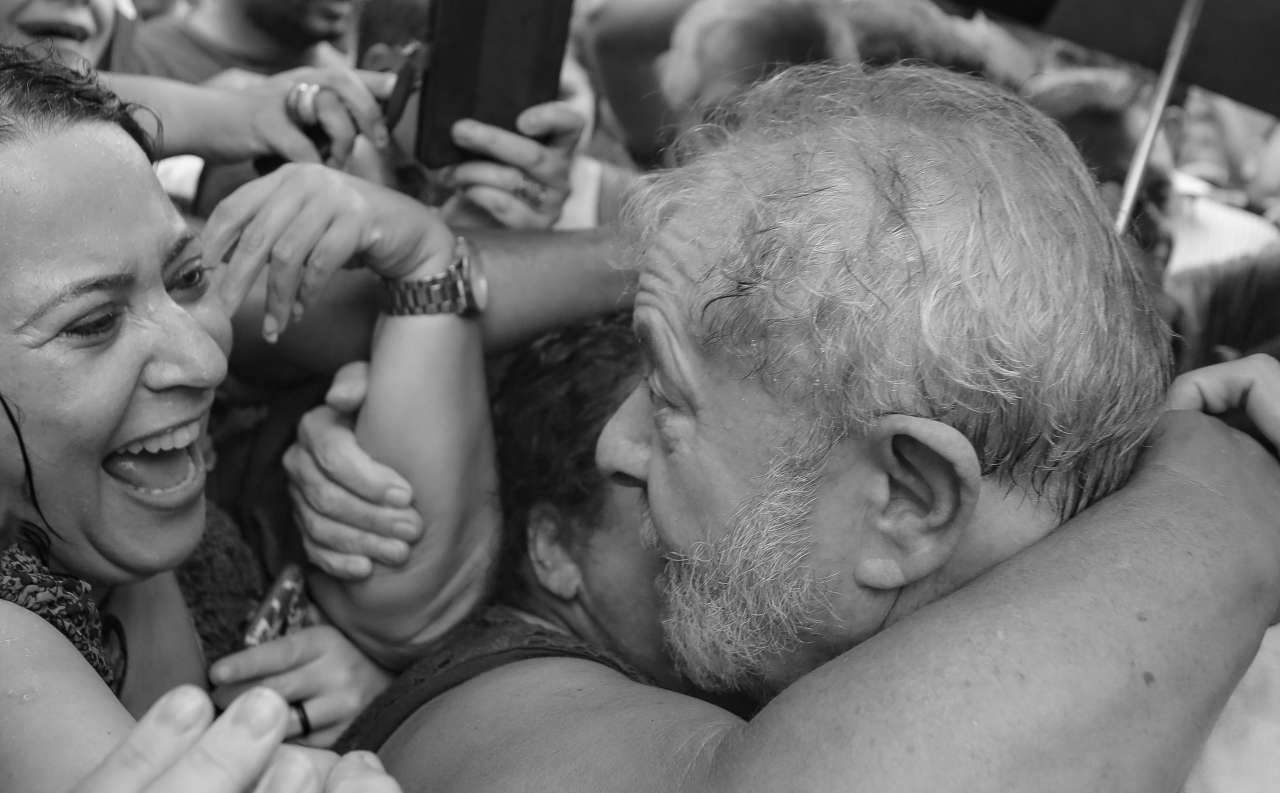 Justice for Lula, Peace for Brazil

On the day in which the Brazilian Supreme Court  returns to deliberations over whether it will uphold the 1988 Constitution and respect defendants’ rights to await their appeals verdicts in freedom (which they made an exception to in order to facilitate Lula’s imprisonment last year), a group of 14 of Brazil’s top artists and intellectuals have released the following manifesto calling for Lula’s immediate release. The farce of Lava Jato, they say, is that disgraced former judge Sérgio Moro has released 120 confessed white collar criminals while Lula, who is totally innocent, sits in jail.

Justice for Lula, Peace for Brazil

We are Brazilians with diverse backgrounds and convictions, engaged in diverse activities, who are united through the shared values of democracy, justice and respect for human rights. At this grave moment in the history of our nation, we feel it is our duty to draw the attention of Brazilian society and the international community to the great injustice that is being committed against a leader who represents these values: former President Luiz Inácio Lula da Silva.

Because we understand that Lula’s imprisonment strikes at the heart of citizenship, the rule of law and true justice in Brazil, we support and publicize this document denouncing the abuse and illegal nature of a cruel, biased procedure that was conducted with political objectives. Since there is nothing that is hidden that will not be revealed, it is up to the Supreme Court to correct this error, to reestablish the truth and to provide democratic peace for the nation.

Lula imprisoned while the corrupt run free: the farce of Lava Jato

In December, 2015, as the impeachment process began against Dilma Rousseff, the Lava Jato investigation directed its efforts to convict and arrest former President Lula, relying on the systematic collaboration of the big media companies. From that moment, when Sérgio Moro began to spy on the former President, until August 2016, TV Globo’s Jornal Nacional nightly news program gave 13 hours of negative coverage of Lula, an average of 4 minutes per night according to the Rio De Janeiro State University (UERJ) Media Studies Laboratory. In this manner, the nation was prepared for the accusations made in Deltan Dallagnol’s power point presentation that September. It was the biggest campaign ever seen against a Brazilian leader, preceding the unfair arrest and the barring of Lula’s candidacy in 2018.

It is always worth remembering that Dallagnol accused Lula knowing full well that the triplex apartment did not belong to him and that there were no facts to build a case, just the prosecutors’ “convictions” and old and fake newspaper stories. Furthermore, Sergio Moro had no jurisdiction to rule on Lula’s trial because, as he himself admitted during the proceedings, there was no relationship between the renovation of the apartment and the suspicious contracts that led the Curitiba Court to investigate Petrobras. Lula was convicted of “indeterminate acts” because the judge wanted it that way and because, even without evidence, the defendant had already been convicted in the headlines and on TV.

Lula lost his freedom and Brazil lost its peace. Brazilian society was poisoned by political hatred, infected in in social media networks, the press, the temples, the schools and the barracks. Intolerance and contempt were directed against every attempt to cast doubt on the Lava Jato investigation and its methods and to question the master narrative – even in the academic world. Lula’s arrest became dogma in the moral crusade that also condemned the political, social and economic vision his government represented: national sovereignty, social justice and inclusive growth. It marked the end of an era.

But today it is impossible not to recognize the fact that Lula deserved a fair trial and not the weaponized, judicial farce that was constructed to arrest him. Today it is clear that, contrary to fighting impunity and corruption, the Lava Jato investigation has corrupted itself, corrupted the judiciary and corrupted the electoral process. It has lied to the country and the courts and left dozens of confessed criminals unpunished and very rich, after being pardoned by Sergio Moro. The spectacular arrests, transmitted live on TV, created an unprecedented sense of justice in the population that was quietly dismantled through richly rewarded plea bargain deals.

Sérgio Moro directed every step of the persecution against his political adversary, who he treated as an enemy to be defeated, in violation the law and the Statue of the Judiciary which dictates how an impartial judge must act. With media encouragement and coverage to commit crimes and abuse, Moro directed aggressive actions by a Paraná Federal Public Prosecutors Office task force and the Federal Police. He acted as police officer and prosecutor in a case in which he was supposed to be the judge.

All of the violations of rights and the crimes committed against Lula were denounced by his defense team but this was systematically censured by Globo. Accessories to the crime, contaminated or threatened, the big media companies never gave a balanced description of the details of the case, not even when, in October, 2016, the UN Human Right Committee agreed to preliminary review the accusation that there was legal persecution of Lula underway in Brazil against Lula, which transformed the Lava Jato investigation into an international case of Lawfare.

The wall of silence on the ex-judge’s bias only began to crumble when Sérgio Moro abandoned his career to become a Minister for Bolsonaro, the President who he helped elect when he convicted the man who was leading in all of the election polls. At that moment the ex-judge’s motives became clear. He was politically aligned with the candidate who used dirty money to build an industry of lies against Lula and the PT’s presidential candidate which Justice Minister Moro swept under the rug instead of opening an investigation.

Starting on June 9th, 2019, when the Intercept Brasil began to release the secret chat conversations between Deltan Dallagnol and Moro with prosecutors in Curitiba, Brasília, São Paulo and Rio, the crimes committed by Lava Jato were exposed to the public in a manner that was embarrassing for the Public Prosecutors and the Brazilian legal system. The world press halted the praise it had always given Lava Jato and began to denounce the fraud and abuses committed against Lula.

Despite the censorship on the Jornal Nacional news program about the messages and the efforts made to criminalize the media companies publishing the leaked conversations in what is now called the “Vaza Jato” scandal, 53% of the people know about the secret conversations between Moro and Dallagnol, according to the Vox Populi polling agency. The national and international legal communities repudiate the illegal collusion between the judge and the prosecutors who forged accusations, arrested people to intimidate them, wire tapped defense lawyers and the President of the Republic, manipulated leaks to the media, hid evidence, lied to the Supreme Court and made fun of the law and even Lula’s grief at losing family members.

There is no way to keep hiding so much abuse. Therefore, they are doubling down on lies, even to influence a Supreme Court decision on actions that do not directly concern Lula – the constitutional principle of presumption of innocence. It is a lie, for example, to say that thousands of criminals will be released because the Constitution guarantees everyone the right to appeal their case in freedom. The law already determines the precautionary arrest of people who actually threaten society. It is not and could not be an automatic rule, it has to be analyzed on a case by case basis by the judge.

It was not the appeals of “expensive lawyers” in the higher courts that led to the release of at least 120 of the 159 people who were convicted through the Lava Jato investigation. It was Sergio Moro and his prosecutors who promoted this injustice by negotiating plea bargain deals with corrupt defendants who confessed their crimes, even selling them pardons which is not authorized by law, in exchange for any testimony – even false testimony – that would serve their interest to incriminate Lula. It was Sérgio Moro who released, for the second time, the currency speculator Alberto Youssef. Originally sentenced to 122 years in prison for corruption and money laundering, Yousseff is already back operating in the stock market.

Today it is no longer possible to postpone the Federal Supreme Court ruling on the habeas corpus which Lula’s defense team needs to reverse Moro’s sentence and to guarantee the former President the right to the fair trial he never had. The defense lawyers have demonstrated and the Vaza Jato scandal has exposed the fact Moro and the prosecutors were biased against Lula from the beginning of the case. For this reason the pressure is increasing on the Supreme Court, causing partisan politics to influence a decision which should be based only on the light of the law and analysis of the acts committed.

In April, 2018, the absurd pressure on the Court went all the way up to the Army high command, leading to a strange ruling in which the Supreme Court denied Lula’s habeas corpus, despite the fact that the majority of the Justices understood that he had the right, as any citizen, to appeal his case in freedom. In September, a similar mechanism was used to make the Supreme Electoral Court disregard the UN ruling that guaranteed Lula the right to run for the presidency even though he was in prison. This move ripped up the election laws and the International Treaty on Civil and Political Rights, which was signed and ratified in a sovereign fashion by Brazil.

Enough! The democratic rule of law cannot be subject to pressure, nor can it tolerate exceptions which discriminate against one single citizen. There is nothing in the Constitution saying that the law applies to all except for one person named Luiz Inácio Lula da Silva. There is only one Brazilian criminal code – there can’t be a Lula Criminal Code just for Lula or against Lula. Brazil and democracy have already paid an extremely high price for the illegal imprisonment of the ex-President and the cancellation of his citizenship. Only political revenge, blind hatred and cold insensitivity can prolong an injustice which has endured since April 7th, 2018.

Four years after the beginning of the hunt against Lula, the man who is on the defendants stand today is Sérgio Moro, who tricked the nation, broke the law, pardoned corrupt millionaires and condemned hundreds of thousands of workers to unemployment. The ones on the defendant’s stand are Deltan Dallagnol and Rodrigo Janot, who used Lava Jato to gain power, fortune and fame, who delivered Petrobras to United States interests in a crime of treason and bribery which would have delivered hundreds of millions of dollars to a private foundation under their control if it weren’t for the angry reaction of society and the timely intervention of the Federal Supreme Court. It was they who delivered Petrobras to the defendant’s stand in New York, bleeding the state company of $4.8 billion USD.

These are the facts that demand the reflection of society, citizens’ mobilization and action by the Supreme Court, which is the guardian of the Constitution. As powerful as the contrary political and economic interests are, the nation needs to reencounter the rule of law in its entirety and to reestablish the basis of democratic dialogue, which cannot exclude any political tendency or leader through arbitrary actions, intimidation or any other form of injustice. Enough! Lula deserves justice and Brazil needs peace.