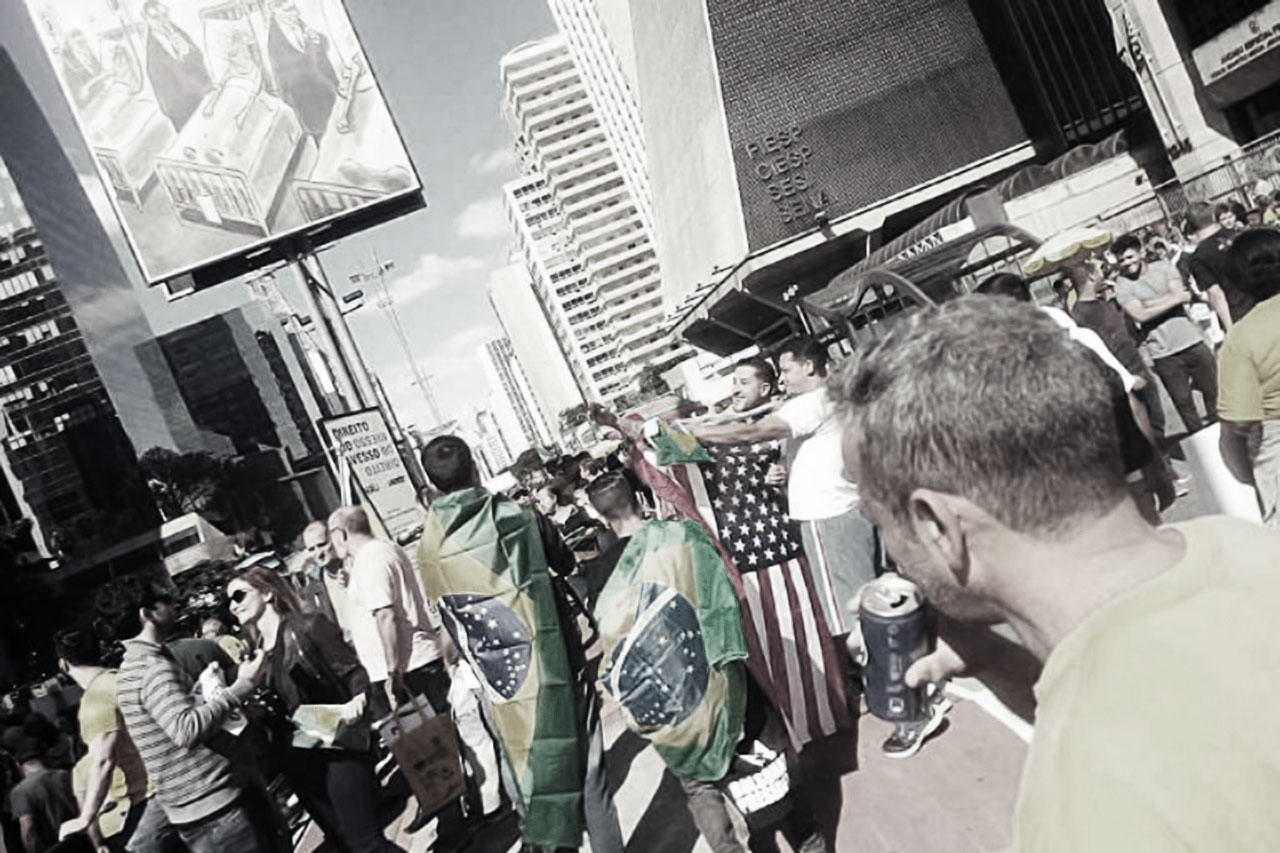 Sunday 26th May saw demonstrations in 52 cities around Brazil, in support of the beleaguered Presidency of Jair Bolsonaro. After five months his is now considered the worst start for any President of the modern era, with record public disapproval at this early stage. Having run on a platform sold as market friendly, investor confidence in the Bolsonaro government has also collapsed almost completely.

The demonstrations were an attempt to prove that the neo-fascist had the streets – an answer to the enormous protests which shook Brazil on May 15th. Those were rooted in resistance to his government’s attacks on education, but also firmly against pension reform and other government policy, and hostility to Bolsonaro himself. 15M brought up to two million to the streets across the country on a thursday afternoon and judged against that, this pro-government response, despite the inherent headstart of being held on a Sunday, was a failure – in Brazilian terms, a fracasso.

That the demonstration was called at all further exposed the chronic weakness of the Bolsonaro  government.

There was a telling, choreographed response from Justice Minister Sergio Moro, who called May 26 a “Feast of Democracy”. Moro insisted it was not authoritarian in nature, despite there being calls for military intervention, the closure of Congress and the Supreme Court, and physical – even death threats – against politicians opposed to Bolsonaro. The message was perhaps also a reflection of Moro’s own potential presidential ambitions.

Yet again US and Israeli flags were abundant, contradicting the notional patriotism that Bolsonaro is supposed to represent.

Several former allies, individuals and groups such as the pro-coup MBL boycotted the demonstrations, perhaps for damage limitation fearing low numbers, and Jair Bolsonaro appeared to stop short of overt participation. The President did however post images and videos from the demonstrations around Brazil on his twitter account, thus amplifying their perceived size.

Photos of earlier, larger demonstrations which took place from 2015-2018 were also circulating, as if current.

In São Paulo several groups concentrated in front of MASP and FIESP. An inflatable Sergio Moro as Superman towered above a spartan crowd on the esplanade in capital Brasilia, while the demonstration at Rio de Janeiro’s Copacabana faced competition from a rival protest against Military Police killings of the city’s black population, a few kilometres away on Ipanema adjacent to Posto 8. More humiliating still, the annual marches for the legalisation of marijuana drew bigger crowds in the cities which held them on the previous day.

“Demonstrations on Sunday showed that Bolsonaro has supporters willing to take to the streets, but it is not the mythic popularity capable of embarrassing Congress. The demonstration on Avenida Paulista (in São Paulo) occupied several blocks, but the public was spread out, leaving empty spaces”, observed Carlos Melo of Insper to BBC Brasil, for a piece in which political scientists concluded that the demonstrations were not large enough for him to evade the crisis engulfing his Presidency.

Veteran journalist Josias Souza evaluated that “to imagine that the streets strengthened Bolsonaro is an illusion”, while commentator Leo Sakamoto said that only Bolsonaro supporters, not Brazilians in general, were out on the streets in support of  his reforms. Sakamoto also predicted that provocations such as the tearing down of a pro-education banner from the entrance of the Federal University of Parana in Curitiba, could work to amplify the second big anti-government protest scheduled four days later on May 30.

So it all fell a long way short of what happened on May 15, but narrative is more important than numbers. It was essential that May 26 was at least made to appear like a show of strength for the disintegrating far-right President. This was of course where his infamous online support would come into its own.

In 2015 and 2016 the large protests calling for Dilma Rousseff’s impeachment were shadowed by pro-government demonstrations in her defence, often of comparable size. These were almost completely ignored by media, which was for the most part running with a pro-impeachment line, and the idea that there was any significant mobilisation in Rousseff’s support was difficult for journalists and editors to accommodate without contradicting their narrative. It was easier to just omit them entirely.

We documented the discrepancies in reporting pro and anti-government protests at the time, and illustrated a clear pattern: Brasil’s Prescribed Revolt, Repression of anti-coup protests, The Big Hush. In Numbers we dealt specifically with the tendency for the military police and media to inflate the numbers of right-wing protests and minimise those of the left.

The difference in May 2019 is that these relatively small pro-Bolsonaro protests are being given a comparable level of coverage as those which gave the coup the appearance of universal support 3-4 years ago. Back then, a justification for not covering demonstrations of resistance against the coup was that “pro-government protests are not newsworthy”. For some reason right now, with a neoliberal programme being pushed through at the point of a gun, that is apparently no longer the case.

There is a cognitive dissonance running through anglo corporate media coverage of Bolsonaro’s presidency, as whilst he is now personally indefensible, they are still pushing the Wall Street-friendly reforms (in particular the capitalisation of the pension system), of his economy minister, Chicago boy Paulo Guedes, who like Bolsonaro himself may also be on borrowed time.

Isolated in congress, and retaining only his fanatical support, it is increasingly unlikely that Bolsonaro will complete his Presidential term. However, the risks of further damage to Brazil’s already moribund democracy remain. The failure of May 26 might at least reduce the risk of a Fujimori-style auto-coup, that is, if the Military have read the streets correctly.

(As a policy we do not publicise far-right demonstrations while they are taking place).