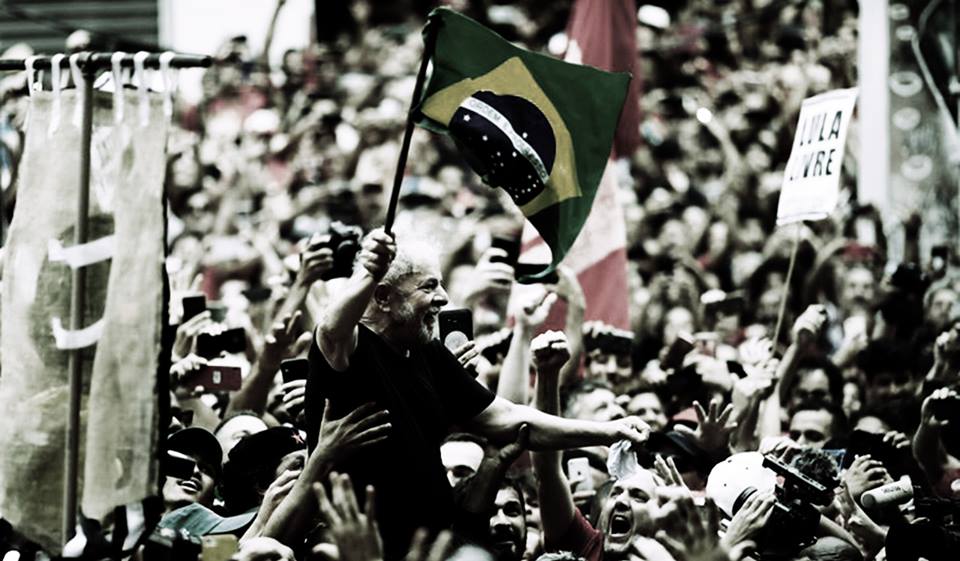 Fear of Lula is fear of democracy

Both the far-right and the “center” are afraid of Lula. It is not because he is a violent radical, but because he represents the possibility of real social, economic and political ascension for the common people.

Right wing extremist Steve Bannon recently said, “Lula is a great leader of the ‘globalist left’[…] his release will bring a ‘huge disturbance’ to Brazil.”

Here in Brazil the media companies are already trying to criminalize Lula’s freedom.

Their arguments are so ridiculous that it’s shocking, even taking into consideration the mental destitution of our big media companies. According to them, Lula’s freedom will radicalize Brazilian politics and contribute to weaken the “political center.” With this, they create an equivalency between Lula and Bolsonaro. Believe it if you wish.

But nothing more grotesque and wrong. The differences between the two are huge.

First of all, Lula is an authentic democrat. He is someone who built his political career in the struggle for the re-democratization of Brazil. He is someone who was imprisoned during the military dictatorship simply for leading strikes for higher wages, and a person who participated in all of Brazil’s liberation struggles.

Furthermore, Lula built a very moderate government based on national conciliation. He brought dozens of millions of people out of extreme poverty, significantly reduced inequality, increased opportunities for the historically excluded, but also did not damage the interests of traditional elites. To the contrary, in his government the businessmen – mainly those who produced for the internal market – made huge profits because there was an exponential increase in consumption caused by the stimulus of the mass market. Lula, a master of negotiations, became admired by everyone exactly due to his capacity to democratically conciliate diverse interests.

Bolsonaro, on the other hand, has built a government of constant confrontation based on a fierce discourse of hatred. He does not negotiate and does not try to make compromises, only attack. He even attacks former allies. Unlike Lula, who tried to govern for everyone, he runs a government for the few. He benefits big national and international capital and barbarically attacks the rights and interests of the lower classes. He tirelessly works for the welfare of his family and a few allies, and dedicates his time to relentlessly persecuting whoever he decides are his enemies. Bolsonaro is not only a fascist, he is a crude and primitive fascist with a world view based on provincialism and vigilantism.

Therefore, labeling the two as opposites of the same political phenomenon represents an unbelievable level of intellectual bad faith, tantamount to comparing Nelson Mandela to Hendrik Verwoerd, the creator of apartheid.

This bad faith may come from the fact that the so-called “political center” (or a large part of it) is allied with Bolsonarism. Bolsonaro, a mediocre, unproductive congressman, would have never taken power if it weren’t for the decisive support of this “political center”, composed by the press and by the traditional center and right wing parties, which supported the 2016 coup, and the imprisonment (without evidence) of Lula and ferociously promotes hate speech against the PT and against the left in general.

One of the main characteristics shared by the Brazilian and Latin-American oligarchies is their lack of real commitment to democracy and inability to coexist with significant processes of income redistribution, poverty fighting, and the social and political ascension of segments of the population who have been historically excluded from the benefits of development.

In Brazil, as is happening now in Bolivia, a government that increased real democracy, increased opportunities and rights, and permitted the rise of the historically excluded provoked extreme fear in the oligarchies who were used to, at most, a restricted and exclusive democracy that did not threaten their class interests or their traditional domination over the political system.

There has always been a kind of demophobia in South America – a fear of losing political control to the great, impoverished masses. Perón, Getúlio Vargas (in his second government), João Goulart, Chavez, Correa, Lugo, Kirchner, Evo Morales, etc. provoke this fear and hatred, despite the fact that none of them ever reached a point near socialism, much less communism.

Lula was a moderate, but was also very conciliatory. The fear of Lula cannot be justified, therefore, by his supposed “radical” profile, or due to a disruptive and violent role, such as the one undeniably adapted by Bolsonaro and Steve Bannon.

What Bolsonaro and the political “center” have in common is the fact that they want a restricted, controllable democracy without any processes of broadening the rights and political and social ascension of the great masses. If this happens again, they will unite to promote coups, even if they are digital and discrete.

They are the violent radicals. I believe it was Max Horkheimer who said that fascism is the “truth” of capitalism. It is capitalism without ideological disguises. Bolsonaro, in all of his raw and authoritarian crudeness, is the “truth” of our traditional oligarchies and conservative media classes. It may be embarrassing or make them feel uncomfortable, but for now, he fulfills the role of defender of the interests of international capital and national oligarchies.

Both the far-right and the “center” (or part of it) are afraid of Lula. It is not because he is a violent radical, but because he represents the possibility of real social, economic and political ascension of the common people.