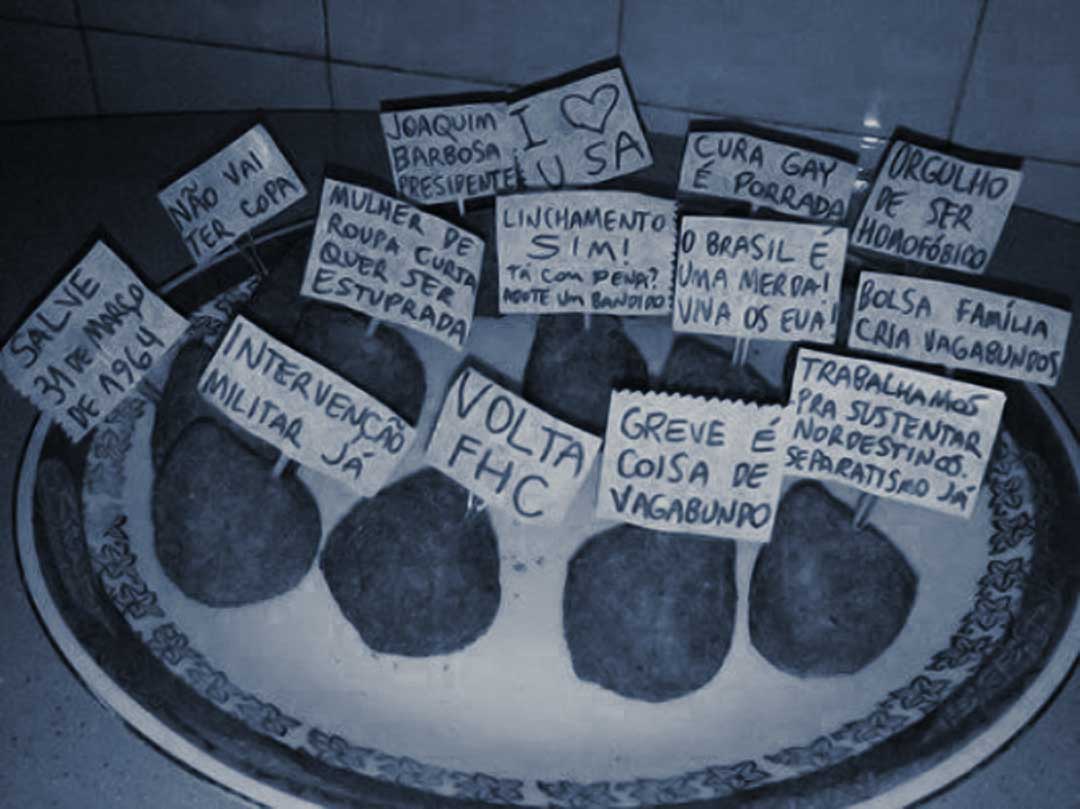 Anti-government protests fizzle: Could this be the end of a cycle?

During a year in which the Brazilian Military Police claimed that the São Paulo gay parade somehow shrunk from its regular crowd of 2.5 million people to 20,000 with no discernible difference in size  it’s hard to treat crowd estimates seriously, especially coming from traditional anti-PT media oligarchies who own Veja Magazine, O Globo and Folha de São Paulo. So when the Folha announced that  that crowd numbers in yesterday’s anti-government protests on Paulista avenue dropped “40%” from their peak in March its a safe bet to say that the real numbers were significantly lower. Some U.S. media breathlessly reported figures of “one million” protesters despite no data to suggest anywhere near that.

In the lead up to Sunday’s protests Globo TV network backed off on its relentless attacks on the Dilma Rouseff administration. Even so, it spent all day Sunday breaking into it’s regular programming to show footage of anti-government protesters. During the afternoon Corinthians match, a split image simultaneously showed the game and protest footage from around the country. Despite all the hype and the low, wide angle camera shots there was no masking that the crowds were much lower than expected. Globo TV referred to the yesterday’s crowd in Rio as being “in the thousands”. In my former hometown of São Luis, the official crowd numbers dropped ten-fold. I passed through Paulista/Consolação Metro station at 1PM and saw handfuls of protesters in CBF jerseys compared to the huge sea of yellow and green I saw there while covering the March protests.

It looks like the attempted soft coup that kicked off in 2013 has come to an end. But as the smoke clears amid opposition party infighting it’s hard to declare a victory for the PT party.

As conservatives tried to build an anti-Dilma narrative out of the 2013 municipal public transportation protests the opposition began to weave a failed nation narrative in order to bolster regime change. During the 2014 election season Rousseff increased concessions to PT’s main coalition partner, the PMDB. Despite constant attacks based on hearsay and selective coverage of corruption issues in the Brazilian media that echoed into publications like the New York Times (which quoted the notoriously partisan & unreliable Veja magazine in 6 articles during the week before the election) Dilma was re-elected. Signs of a rupture with PMDB began to show in the lower house, led by Evangelical house speaker Eduardo Cunha.  Instead of fighting back, Dilma tried to placate conservatives even more by putting a renowned neoliberal economist, Joaquim Levy, in charge of the finance ministry.

Levy announced something antithetical to everything that PT used to stand for: austerity measures. Backing off on an initial promise to clamp down on tax evasion and implement a tax on large fortunes, the administration cut stipends for doctoral students at public universities by 75%, increased the amount of time on the job needed to apply for unemployment insurance from 6 months to a year (after nationwide protests from the CUT and CTB labor union federations forced a compromise) and announced plans to raise the retirement age from 62 to 65.

As the union federations and social movements began to distance themselves from Rousseff,  Eduardo Cunha announced that the PMDB party was leaving the governing coalition and tried to push through a laundry list of conservative legislation in the lower house.  As misogynist hate speech bombarded facebook and twitter and the media relentlessly plugged away with what now appear to be false allegations of Dilma’s involvement in the Petrobras scandal, many of Brazil’s new middle class turned on Dilma. With this group of approximately 40 million who most benefited from PT policy during the Lula years turning its back, Rousseff found herself with approval ratings at a historic low.

The Brazilian media oligarchies, powerful northern media like the New York Times and northern business interests suggested that regime change was imminent. The big question was would Dilma Rousseff be impeached or would she resign?

Rousseff flew up to Washington to reestablish relations with president Obama that had been damaged by Edward Snowden’s NSA spying revelations.  In a July 31 interview with Der Spiegel, former president Fernando Henrique Cardoso called Dilma an “honorable woman who is not involved in any corruption”.  Vice President Michel Temer ordered his PMDB party members to step in line and Eduardo Cunha (who unlike Dilma Rousseff really has been implicated in the Petrobras scandal) was isolated within his party among rumours that he will be replaced. The far-right Revoltadas Online group began to attack PSDB.  Northern media that spent the last 2 years attacking the Rousseff administration flip flopped and began supporting her.

Although thousands of wealthy, conservative whites are still coming out on the streets in their CBF jerseys, waving Eduardo Cunha or Jair Bolsonaro signs, taking selfies with fascist military police and screaming about corruption, it is clearer than ever that they represent a relatively small segment of the population as a whole.

Dilma Rousseff  caved in to the national and international business community and some of the social gains that happened during the first 10 years of PT government are stagnating. The national and international business community seems content with a weakened PT remaining in power for the next 3 years. PT isn’t the only loser in this process though. Infighting is straining relationships within the Minas Gerais-São Paulo coalition that runs the PSDB party and Evangelical and Neo-Fascist coalitions are becoming isolated on the right.

Despite the best attempts in the media to portray the current Brazilian political and economic context as a country “on the brink”, it looks like Rousseff might have actually weathered the storm. Even the staunchly anti-PT Globo TV network has allegedly ordered its evening newscasters to stop using the word “crisis”.  How long will it be before the northern hemisphere’s media follows suit?