Journalism, according to the American Press Institute,  is “the activity of gathering, assessing, creating, and presenting news and information”. In the case of Anglo media coverage of the corrupt and politically biased Lava Jato investigation, there was a near unanimous failure in assessing the facts. If this was an accident, it is an epic fail. If it was deliberate, then the journalists in question are guilty of aiding and abetting the return of neofascism to Brazil.

The systematic release of leaked Telegram conversations between then-judge Sérgio Moro and public prosecutors by the Intercept and nearly a dozen partner media organizations has destroyed the master narrative – promoted ad-naseum in the Anglo media over the past few years – that the US DOJ-backed Lava Jato investigation was an unbiased anti-corruption operation which jailed former President Lula during last year’s election season because he had committed a crime. Now, new information released over the weekend shows that the Lava Jato task force also colluded illegally with then judge Sérgio Moro to support the 2016 Coup which deposed President Dilma Rousseff, also with no evidence that she had committed any impeachable crime.

On the eve of the coup on March 16, 2016, after President Dilma Rousseff announced she was going to nominate Lula as her Chief of Staff, Brazil’s largest TV network, Globo, aired an illegally recorded phone conversation between them. Although nothing illegal was mentioned, the Brazilian media framed the issue as an attempt made by the “corrupt” Lula to gain governmental immunity from prosecution. This narrative immediately spread, unchallenged, into the international media.

“Lucky Lula! Cabinet job buys Brazil’s ex-president some time,” said Will Carless in USA Today, in an article which ran with a huge and unflattering photo of ex-President Lula. In the Washington Post, an article by Dom Phillips, which featured a photo far-right protesters draped in patriotic green and yellow, referred to Dilma’s offer of the Chief of Staff position to Lula as a “ploy”. In a Forbes article entitled “Brazil Ex-President Lula Offered New Job To Shield Him From Prosecutors, ” veteran Brazil writer Ken Raposa said, “Brazilians believed” that, “If he takes this job. It would be more than shameful. In the eyes of most, it would be an admission of guilt.” 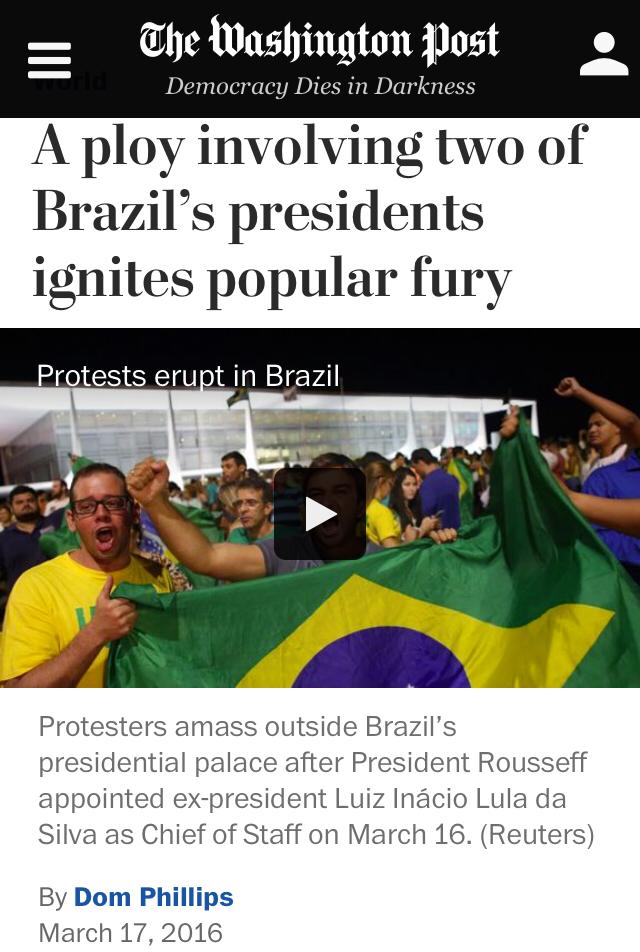 The new Intercept/Folha de São Paulo leaks reveal that framing Lula’s move to accept the Chief of Staff position in the Dilma Rousseff government as a “ploy” cynically undertaken to protect him from corruption charges in a case where he was “clearly guilty”, was a deliberate strategy to manipulate public opinion in favor of the impeachment proceedings underway against President Rousseff. It was undertaken illegally (wire tapping a standing President after they had been ordered to stop), through illegal collusion between a judge and the prosecution team, with support from a Federal Police agent who now Justice Minister Sergio Moro recently promoted to Paraná State Federal Police Superintendent – literally the director of the agency which is holding Lula in solitary confinement. Furthermore the leaks show chief Lava Jato prosecutor Dallagnol saying that he knew what they were doing was illegal but that it didn’t matter because it was “political.” Finally, it shows that the information that was leaked to the media by Moro was taken out of context to deliberately perform character assassination against Lula and Rousseff. Other recordings made the same day show Lula saying the opposite of what was insinuated in Globo, Forbes, The Washington Post and USA Today. The full taped conversation shows Lula came very close to not accepting the position because he did not want people to think that he was doing it to protect himself against the frivolous charges made by Lava Jato, but decided to do it anyway because he believed a coup was in process and thought he might be able to repair the Rousseff government’s strained relations with the PMDB Party.

During 2016 Lula’s defense team held regular press conferences. You would think that Anglo journalists reporting on what was happening at a time would have a minimal ethical commitment to attend them and assess the information presented. Defense team lawyer Valeska Martins, however, complained while I was interviewing her in 2018, that the foreign press had “systematically ignored them”. In 2016, their warning that “Sérgio Moro is trying to intervene in Brazil’s national political organization,” widely circulated in the progressive Brazilian media, but journalists in places like the Guardian appeared to be lifting the most minimally challenging quotes by the defense from local Brazilian newspapers, along the lines of “the defense team insists that Lula is innocent.”

In March, 2016, there was a near unanimous belief among the Brazilian left that a coup was underway and that Lava Jato represented a political lawfare attack designed to remove the PT party from power. This issue was continually mentioned in all of Brazil’s large and sophisticated progressive media outlets, from Brasil do Fato, to the organized labor movement’s TVT television network, and by veteran establishment news journalists such as Paulo Henrique Amorim and Bob Fernandes. None of this ever made it into the commercial Anglo media outlets. Instead, for writing that most people on the large Brazilian left believed Lava Jato to be a politicized operation designed to lay the groundwork for a coup, Brasil Wire was accused of not understanding the rigorous standards of professional journalism, defending corruption, or worse, being “conspiracy theorists.”

In 2017, Alex Cuadros in the New Yorker ignored the huge body of evidence that Lava Jato was a corrupt and politicized witch hunt designed to destroy the Brazilian left. Leaked Telegram conversations now show Lava Jato taskforce chief prosecutor Dalton Dallagnol admiting, 3 hours before the trial, that they had no evidence against Lula.

On May 17, 2016, we published an article questioning the narrative that was being pushed on Lula’s appointment to Dilma’s Cabinet. Like many Brasil Wire articles during that tense historical moment, it was a rush job – but what we said was a far more accurate description of the political conjuncture than the false narrative, based on criminal behavior, that journalists such as Dom Phillips and Ken Rapoza were peddling at the same time:

“The media have been guilty, not only of elevating Lava Jato Judge Sergio Moro to godlike status, and of Lava Jato itself to the level of a new essentialist myth, a necessary stage of national development, exempt from criticism. What has happened, as explained by Professor Jesse Souza, is that the Judiciary have in fact entered the position of higher moderating force, above politics, once occupied by the Military, and before that the Monarchy. The media have enabled this.”

The media enabled Lava Jato, which we now know was a politicized, criminal operation designed to usher in a right wing government, one that is now encouraging genocide against indigenous tribes in the Amazon and a massive increase in police executions of black youth in Rio de Janeiro. By failing to pay any attention to what Brazilian progressives were saying or writing, and by failing to question Brazil’s corrupt commercial media narrative on Lava Jato, many northern papers and the hacks who write for them aided and abetted the return of fascism to Brazil.