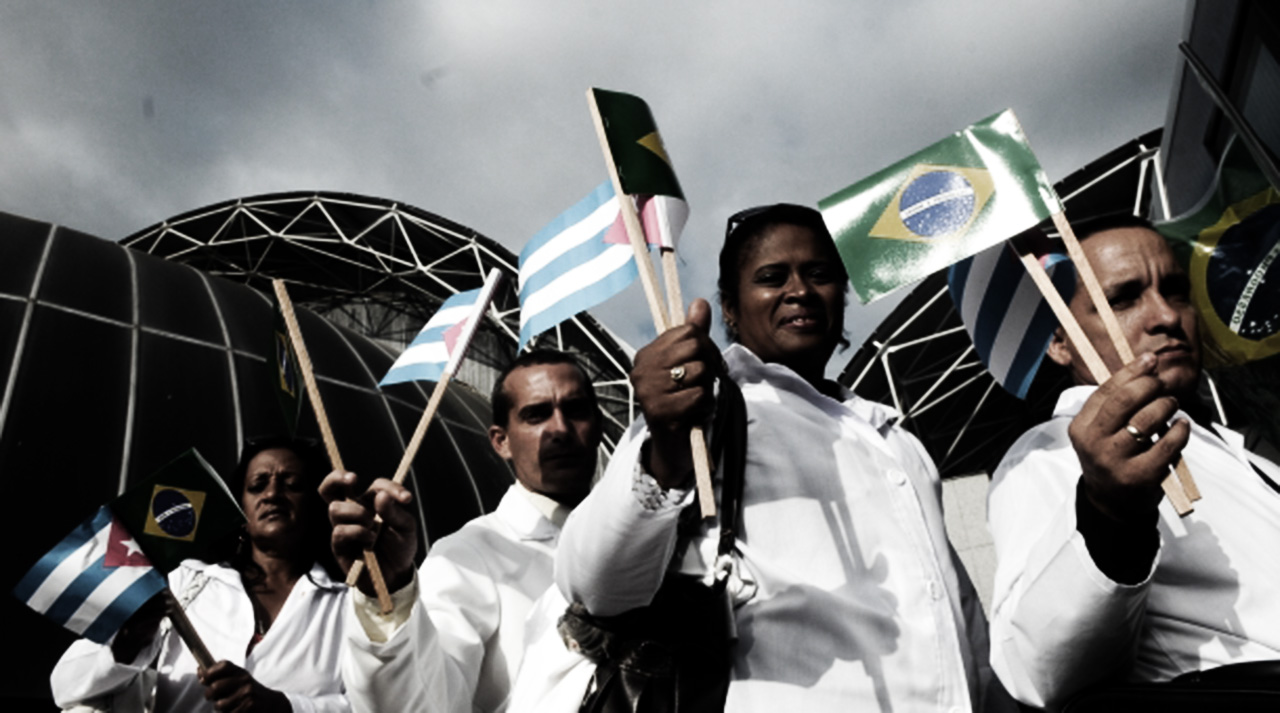 Brazil’s far-right government requested the return of thousands of Cuban doctors to help fight the coronavirus. Months ago, President Jair Bolsonaro smeared the doctors as “terrorists” and expelled them.

The coronavirus pandemic has overwhelmed the health infrastructure of countries around the world. Desperate to contain the deadly virus, hard-hit countries, including even rich European nations like Italy and Britain, have reached out for expert medical help from Cuba, China, and Venezuela.

Even Brazil, currently under the control of a far-right administration that has joined the US in demonizing Cuba’s socialist government, has fallen back on the small nation for much-needed medical support — requesting help from the very same Cuban doctors it expelled months ago.

Brazilian President Jair Bolsonaro has repeatedly called for the restoration of the military dictatorship, threatened his political opponents with violence, and backed terrorist attacks on Venezuela.

Bolsonaro has also taken aim at Cuba, praising the far-right military dictatorship of Augusto Pinochet for supposedly preventing Chile from becoming like Havana.

Before Bolsonaro was elected president in 2018, 10,000 doctors Cuban doctors were inside Brazil, working in some of the poorest, most remote regions of the country. Their assistance arrived thanks to an agreement between Havana and the country’s left-wing Workers’ Party government, which sought Cuban help to treat those that the Brazilian health system had long failed to reach.

Throughout his presidential campaign, Bolsonaro slammed the Cuban doctors in his country as a nefarious fifth column, denigrated them as “terrorists,” and pledged to expel them.

When he took power following a US-backed soft coup against the Workers’ Party government, Bolsonaro made good on his promise. He kicked out many of the Cuban doctors, leaving impoverished rural regions without medical personnel.

By February 2020, however, the Brazilian government began to reverse course. The Bolsonaro administration had been unable to find doctors who would serve in these remote areas, so it agreed to allow the 1,800 Cuban doctors who remained in the country to return to the communities they had previously served.

And now, amid the Covid-19 pandemic, Brasilia’s right-wing occupant has done a complete about-face.

In a press conference on March 15, Brazilian Secretary of Health João Gabbardo beseeched Cuba to send back the doctors who were expelled to prevent the country’s health system from collapsing as it battled a spreading pandemic.

Gabbardo declared that 5,000 of the Cuban doctors re-deployed to Brazil will be assigned to primary care centers across the massive country.

“The PT [Workers’ Party] sent about 10,000 costumed doctors to Brazil here, in poor places, to create guerrilla cells and indoctrinate people. So much so that, when I arrived, they left, because I was going to go after them,” Bolsonaro claimed in a conspiratorial screed in 2019.

The grim reality of the coronavirus crisis has forced even Cuba’s sworn enemies to seek help from its world-renowned medical system.

Brazil has the fifth-largest economy on Earth, as well as the sixth-biggest population, with more than 210 million people. Cuba, meanwhile, is a relatively poor country with just around 11 million people, and is suffering under a suffocating US sanctions regime. But thanks to its socialist system, Havana has highly skilled and ethically committed doctors to spare – even to nations that have assisted the US bid for regime change against it.

The Workers’ Party responded to the news in an official statement: “President Bolsonaro owes apologies to the Brazilian population and to all the Cuban doctors who were practically expelled from Brazil facing attacks, lies, and fake news.”

It is not just Brazil’s far-right government that has spread absurd conspiracies about Cuban medical experts.

The US government has for many years targeted Cuba’s international doctors program, spreading lies and falsely likening it to human trafficking.

The George W. Bush administration created a counter-program in 2006 called the Cuban Medical Professional Parole to essentially bribe the Cuban doctors to defect. The Bush-era program offered residence in the United States to thousands of Cuban medical professionals if they agreed to switch sides and help the US embassy in the country where they were serving abroad.

The New York Times published a dubiously sourced story falsely claiming that the government of Venezuelan President Nicolás Maduro was using the medical attention provided by Cuban doctors “as a political weapon” to “compel patients to vote for the government.”

The Times’ accusation was based on anonymous opposition supporters and former Cuban doctors who defected to live under the right-wing governments of Brazil, Chile, and Ecuador, which each advance policies aggressively targeting Cuba for regime change.

The Times’ propaganda talking points were dismantled by journalists Lucas Koerner and Ricardo Vaz, who live in Venezuela. Koerner and Vas demonstrated meticulously how the “article [was] riddled with factual inaccuracies, omissions and misrepresentations.”

It is true that Venezuela’s medical system has been devastated by the US government’s sanctions and an exodus of many of its own medical professionals.

This March, Cuba dispatched a team of medical experts to Venezuela to help the country contain the Covid-19 crisis.

Venezuela, for its part, has also encouraged regional collaboration to try to fight the coronavirus outbreak.

The country’s leftist government even extended an olive branch to the far-right governments in Colombia and Brazil, which have cut ties with it, recognized US-backed coup leader Juan Guaidóas supposed president, and supported violent terror attacks on Venezuelan soil.

Venezuela called for peaceful dialogue with Colombia and Brazil, emphasizing that the countries should work together to try to contain Covid-19.

The hardline Colombian government of President Iván Duque initially announced that it was going to coordinate with Venezuela’s actual, elected government — but soon after, under apparent US government pressure, it partially backtracked.

Colombia later clarified that it would only work through the Pan American Health Organization and that there would be no direct communication with Venezuela.

While countries around the world are seeking medical help from Cuba to contain the coronavirus, Washington’s allies in Latin America are failing to meet the basic needs of their populations.

The US-backed, right-wing government of Lenín Moreno in Ecuador, which has joined Brazil and Colombia in supporting the Trump administration’s coup efforts against Venezuela and attempting to politically and economically isolate Cuba, decided to outsource coronavirus testing to private for-profit corporations.

Ecuadorian companies are charging $250 to $300 per coronavirus test — in a country where the minimum wage is just $400 per month.

At the same time, the repressive Moreno administration – which violated its own laws in handing over WikiLeaks publisher and Ecuadorian citizen Julian Assange to British authorities – has capitalized on the Covid-19 crisis to push shock doctrine-style neoliberal reforms.

Moreno announced that he would reduce the already low salaries of public sector workers, laying off employees, and slashing the budget of state institutions.

An Ecuadorian teachers organization denounced these neoliberal reforms, declaring in a statement, “Once again, the government of Lenín Moreno is revealing itself to be neoliberal and at the service of the large groups of economic power, and is an enemy and executioner of the poor majority.”

The response of governments in Latin America to the coronavirus pandemic shows a clear trend: The closer a country is to the United States, the worse and more dangerous its conduct has been. Meanwhile, nations targeted by the US for regime change and crippled by its global economic warfare are banding together to protect the health of the international community.